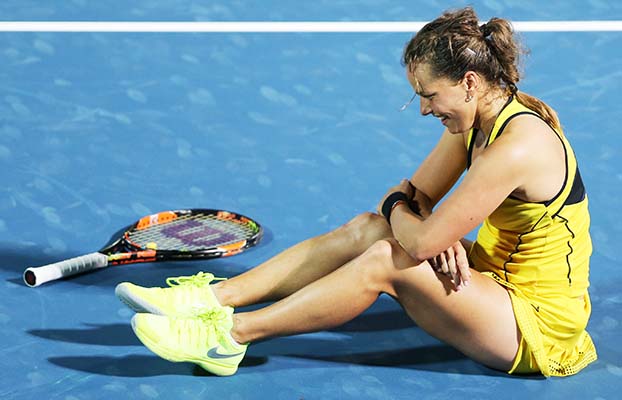 The quarter-final exit of the Serb drove another nail into the only WTA tournament in history to lose all eight seeds as none won a single match to exit in the first or second rounds.

The unfortunate turn of events, combined with the injury pullouts of the world’s top two players in Serena Williams and Australian Open champion Angelique Kerber, have hit the tournament hard.

In addition, Caroline Wozniacki withdrew citing injury but was in attendance this week at the Sports Illustrated awards in New York.

Reports indicate that the WTA will be looking into the pullouts from a tournament which also serves as a major sponsor of the Tour itself.

After her opponent won the hour-long first set with a comeback in the tiebreaker, Ivanovic came up short in a run of three breaks in the second set.

The 2008 French Open winner found herself trailing 3-5, with a return wide on the first of three Strycova match points marking the end a game later.

Strycova will today face Caroline Garcia for a place in the final after the 38th-ranked Frenchwoman beat Germany’s Andrea Petkovic 6-3, 6-4.

“It feels great, I’m happy about it. I’m happy the way I played,” the Czech said. “I’m playing Caroline tomorrow. She’s a young gun, I’m looking forward for that.

“I believed myself today, and I changed some things before I went on court. I lost my previous matches against Ana, so I had to change a little bit the return.

“I was trying to be aggressive because the conditions on this court are really fast.”

Sara Errani struggled through a match littered with 39 break point chances to post a difficult 4-6, 6-1, 6-4 defeat of Madison Brengle.

The Italian, who played the 2013 final in Dubai against Petra Kvitova, will next play against Ukraine’s Elina Svitolina who beat American Coco Vandeweghe 6-4, 1-6, 6-2.