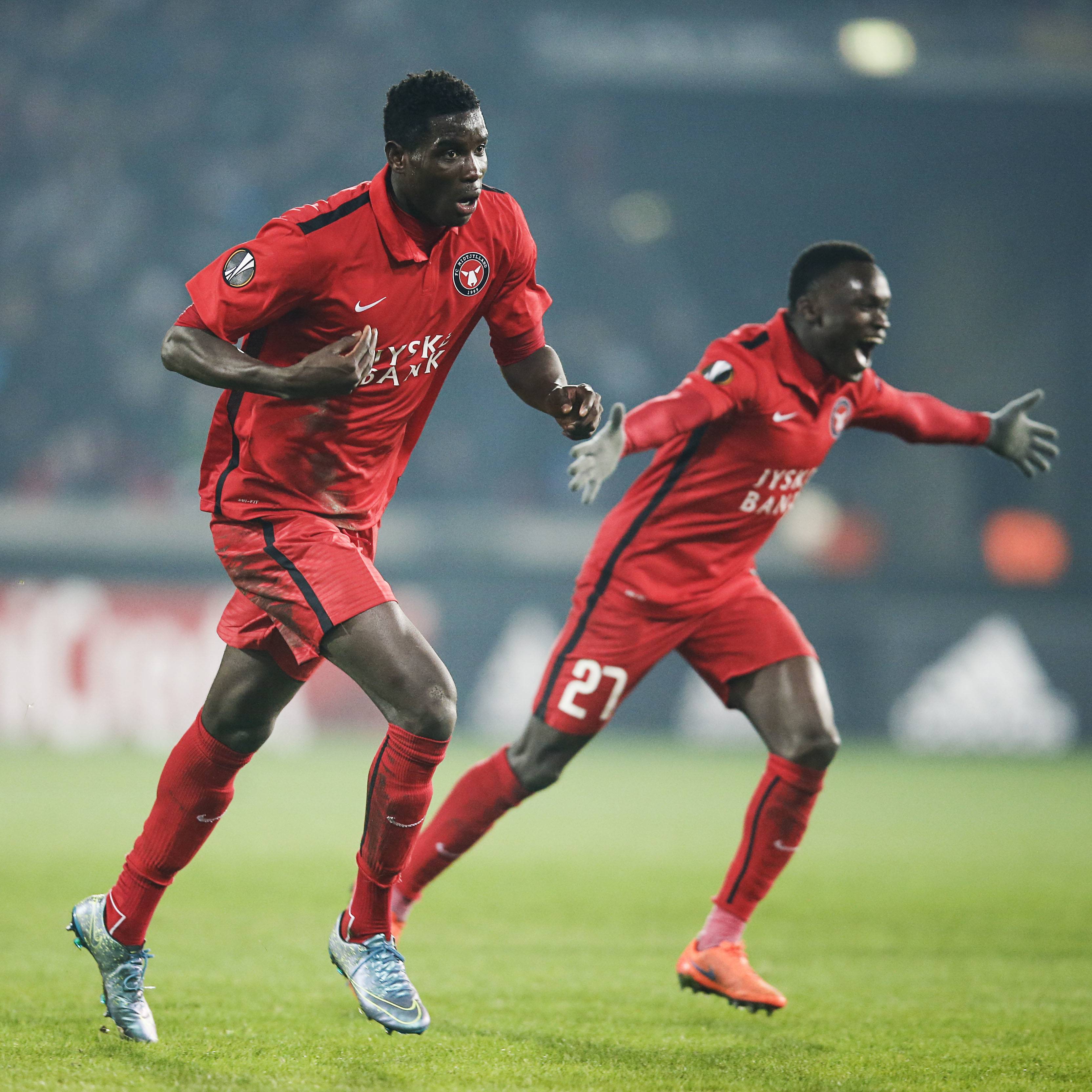 Midtjylland's Ebere Paul Onuachu, left, and Pione Sisto celebrate at the end of their Europa League round of 32 first leg match against Manchester United.

Paris: A miserable season for Louis van Gaal and Manchester United took a new turn for the worse on Thursday as they lost 2-1 away to Danish champions Midtjylland in the Europa League.

Goals from the talented Pione Sisto and young Nigerian forward Paul Onuachu gave Midtjylland the victory in Herning after Memphis Depay had put a weakened United side ahead in the first leg of their last-32 tie.

That away goal gives United every chance of turning things around in next Thursday's return at Old Trafford but the spectre of a humiliating exit hangs in the air at a time when Van Gaal's side lag behind in their bid to finish in the top four of the Premier League.

The Dutch manager has admitted winning the Europa League may now be his side's best chance of qualifying for next season's Champions League and this latest setback will only increase the pressure on him.

He sent out a weakened side with Sergio Romero replacing the injured David de Gea in goal, and the likes of Paddy McNair and Donald Love featuring from the start against opponents who eliminated Southampton earlier in the competition, and Midtjylland deserved their win.

"It's just not good enough. It's not acceptable. It's got to be a lot better," admitted United midfielder Michael Carrick, speaking to BT Sport.

"We didn't really kick on after we scored. With a performance and a result like that we go home very disappointed."

Premier League title contenders Tottenham Hotspur fared better, coming away from their trip to Italy to face Fiorentina with a 1-1 draw that puts them in a strong position ahead of next week's return.

Mauricio Pochettino sent out a strong side, albeit one missing first-choice goalkeeper Hugo Lloris and with Harry Kane on the bench.

And Spurs went in front in the 37th minute when Nacer Chadli converted from the penalty spot after Ben Davies was brought down by Nenad Tomovic.

However, Fiorentina, who sit third in Serie A, drew level just before the hour mark thanks to Federico Bernardeschi, whose long-range strike beat Michel Vorm with the aid of a deflection off Ryan Mason.

Meanwhile, Jurgen Klopp's return to Germany with Liverpool saw his side draw 0-0 with Bundesliga outfit Augsburg in Bavaria, leaving that tie finely poised.

Liverpool may regret not getting an away goal, but it could have been worse for them as substitute Ji Dong-Won hit the woodwork for the hosts late on.

Valencia can already start looking forward to the last 16 after destroying Rapid Vienna 6-0 at the Mestalla to give under-fire coach Gary Neville a major boost.

Valencia were five goals to the good at the break with Santi Mina scoring two and Dani Parejo, Alvaro Negredo and Andre Gomes also on target. Substitute Rodrigo wrapped up the win late on.

Holders Sevilla have one foot in the last 16 after beating Molde of Norway 3-0 at the Sanchez Pizjuan with Fernando Llorente netting twice before Kevin Gameiro wrapped up the win.

Fellow Spaniards Villarreal beat Serie A visitors Napoli 1-0 via a late goal from Denis Suarez, and Athletic Bilbao completed a fine night for clubs from La Liga as they won 1-0 at Marseille thanks to a stunning volley by Aritz Aduriz, the veteran striker scoring his 26th goal of the season.

Elsewhere, Borussia Dortmind put themselves in a strong position against FC Porto as they beat the Portuguese giants 2-0 at the Signal Iduna Park thanks to a goal in each half from Lukasz Piszczek and Marco Reus.

Dortmund's local rivals Schalke drew 0-0 with Shakhtar Donetsk in Ukraine while Bayer Leverkusen won 1-0 at Sporting Lisbon with Karim Bellarabi getting the only goal.

Anderlecht beat Olympiakos 1-0 as Serigne Mbodji got the only goal of the game in Brussels, while a late strike by Jean-Christophe Bahebeck, on loan from Paris Saint-Germain, gave Saint-Etienne a 3-2 win at home to Swiss champions Basel.

Lazio came from behind to draw 1-1 with Galatasaray in Istanbul thanks to a Sergej Milinkovic-Savic strike, while Sparta Prague edged the Russians Krasnodar 1-0 and 2011 runners-up Braga beat Sion 2-1 in Switzerland.