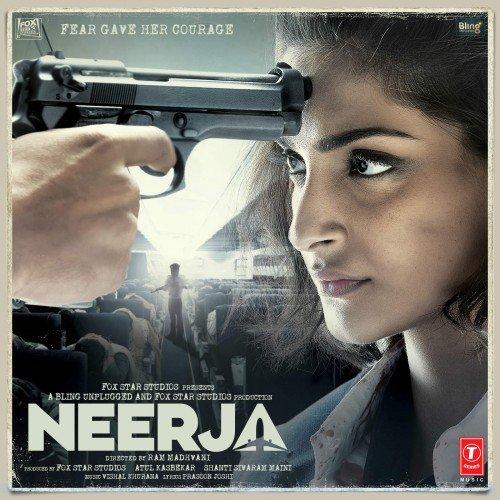 Bollywood biopics often go off the rails as a result of excessive dramatization. Ram Madhvani's Neerja is a happy exception.

It dispels all worries at the very outset, adopting a realistic tone and tenor and staying with it until the very end.

The extraordinary story of flight purser Neerja Bhanot's exemplary sacrifice to save the lives of 350-odd passengers on a hijacked Pan Am aircraft in 1986 has been the stuff of legend for three decades.

Not only did Neerja win bravery awards from three nations (India, Pakistan and US), she also has one named after her.

Piecing her tale of courage and commitment together for the big screen, scriptwriter Saiwyn Quadras weeds out all that is superfluous and focuses firmly on the essentials.

The focus of the story is of course on Neerja (Sonam Kapoor), but also important to the graph of the central character, are her mother (Shabana Azmi) and father (Yogendra Tiku), the two people who set her free to fly to unprecedented heights.

This real-life braveheart was only 23 when she laid down her life in the line of duty and attained immortality, but she had seen enough already for this film about her not be uni-dimensional.

'Neerja' is the story of a failed hijacking in which 20 innocent people lost their lives. But it is equally the story of a gritty woman who had the courage to not only rise above the limitations that her gender would have imposed on her in the 1980s, but also to bounce back from a very bad arranged marriage.

On the fateful day that she is driven to the airport in the wee hours of the morning, there is promise of a fresh beginning for her, thanks to her growing friendship with a another man (Shekhar Ravjiani).

She has a thriving modelling career and her affectionate mother suggests that she should give up the job of an air hostess. But Neerja dismisses that advice.

When four Palestinian hijackers storm her aircraft in Karachi, she is understandably caught off-guard initially. But she quickly gathers herself to assume the role of a leader on board, guiding the passengers and her co-workers through moments of great duress.

While most of the action occurs inside the aircraft, brief flashbacks reveal the formative moments of Neerja's life.

Sonam Kapoor, delivering the finest performance of her career in 'Neerja,' is, like the eponymous heroine, in complete control. She underplays the more poignant scenes, heightening their impact in the bargain.

Shabana Azmi is in her elements, traversing a gamut of emotions with amazing, awe-inspiring finesse. Yogendra Tiku, in perhaps his most rounded role in a Hindi film, leaves one wondering why he isn't used more often by Bollywood directors.

'Neerja' is a celebration of a heroic life that makes the most of the emotional traction inherent in the true story.

The decision of the director not to embellish it with gratuitous narrative flourishes is felicitous. It only accentuates the power of the narrative.

'Neerja' is, without an iota of doubt, a must watch.