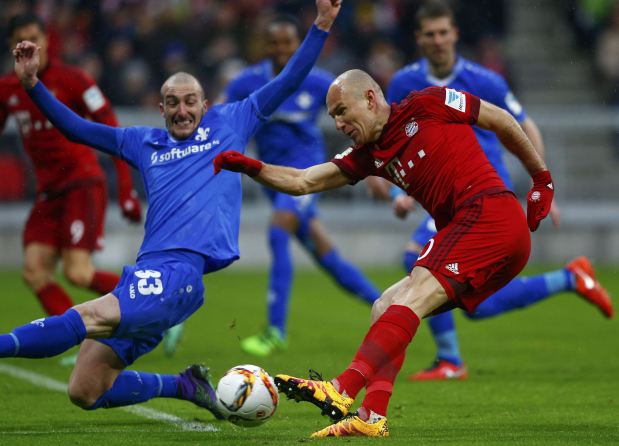 Berlin: Thomas Mueller netted twice on Saturday as Bundesliga leaders Bayern Munich came from behind to beat Darmstadt 3-1 in their last match before their Champions League clash at Juventus.

With second-placed Borussia Dortmund playing on Sunday, Bayern took their chance to go 11 points clear in Germany's top flight but Mueller had to dig them out of trouble at the Allianz Arena before Robert Lewandowski added their third goal.

Against the run of play, Pep Guardiola's Bayern went behind when Darmstadt's Munich-born striker Sandro Wagner headed home midway through the first half.

It was only the fifth time this season Bayern had gone behind.

But using their 81 percent possession to fire in a total of 36 shots on goal to Darmstadt's six, Guardiola's side roared back to claim their 19th win in 22 league games this season.

Serdar Tasci made his debut at centre-back in a makeshift Bayern defence also featuring Rafinha, Joshua Kimmich and David Alaba.

Darmstadt went ahead when Wagner powered his header past Manuel Neuer on 26 minutes, but Bayern were back level four minutes into the second half when Mueller chested down and slammed his shot into the right-hand corner.

He added a superb second -- his 17th league goal of the season -- by chesting down Arturo Vidal's cross and hitting a bicycle kick into Darmstadt's net on 71 minutes.

Lewandowski added the third on 84 minutes when he converted Franck Ribery's low cross after the Frenchman came off the bench for only his third appearance of the season.

It was Lewandowski's 22nd goal of the season in 21 league games to leave him as the league's top scorer ahead of Bayern's Champions League last 16, first leg in Turin on Tuesday.

Elsewhere, fresh from their 3-2 Champions League win at Gent in midweek, Wolfsburg picked up a point in the capital with a 1-1 draw at Hertha Berlin.

Wolves took the lead at the Olympic Stadium when Marcel Schaefer converted Vieirinha's cross on 53 minutes.

But Salomon Kalou equalised with his 11th goal of the season by drilling home a clearance off the line from Wolfsburg's Naldo on the hour mark.

Julian Nagelsmann, the Bundesliga's youngest ever coach at 28, steered Hoffenheim to only their third win of the season on his second match in charge with a 3-2 victory at home to Mainz.

Colombia striker Jhon Cordoba scored his first goal for Mainz in his tenth Bundesliga match when he slotted home early on.

But the hosts roared back as Nadiem Amiri levelled, then striker Mark Uth netted twice.

Hoffenheim remain 17th, but are now only three points from safety after Werder Bremen, who are 16th, lost 2-0 at Ingolstadt.

Cologne fans protested about the price of away tickets at Borussia Moenchengladbach as the hosts sealed a 1-0 win thanks to Mahmoud Dahoud's first-half goal.

Gladbach move up to fifth ahead of Sunday's matches when Dortmund are at Bayer Leverkusen, Schalke play Stuttgart away and Hanover host Augsburg in a key match in the relegation battle.