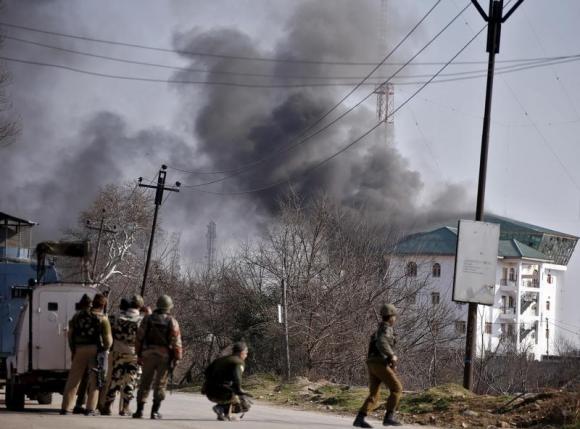 Smoke billows from a building, in which authorities say suspected militants are holed up, during a gun battle on the outskirts of Srinagar February 21, 2016. (Reuters Photo)

Srinagar: Indian security forces battled for a third day amid heavy gunfire on Monday to clear militants who stormed a government building in the disputed Kashmir region and killed six people, officials and a witness said.

After a lull in fighting overnight, army commandos and police launched a fresh offensive to clear the five-storey training institute captured by the militants.

Gunfire and explosions could be heard at the building complex near Srinagar, Kashmir's summer capital, a Reuters witness said.

Indian army and police officials at the scene said three or four militants armed with grenades and machine guns may be inside. The police said one militant was killed on Sunday.

"This is one of the longest encounters in Kashmir in recent memory," said an army officer, who asked not to be named. "This is because the building is very big and we have suffered casualties. So we are being cautious."

Muslim separatists have been fighting Indian forces in the Indian portion of Kashmir since 1989. India accuses Pakistan of training and arming the rebels in the portion it controls and sending them to the Indian side, a claim its neighbour denies.

The attack began on Saturday when militants shot at a bus carrying police before breaking into the training institute. More than 100 people were inside at the time.

Three Indian army commandos, two policemen and a civilian have been killed in the fighting.

The latest attack bore similarities to other militant attacks in India where heavily armed, well-trained men have captured buildings and used them to fight security forces.

A similar recent attack on an Indian air base that lasted for four days stalled efforts to revive bilateral talks between nuclear-armed rivals India and Pakistan.

India and Pakistan fought two of their three wars since independence in 1947 over Muslim-majority Kashmir, which they both claim in full but rule in part. The third was fought over the founding of Bangladesh.