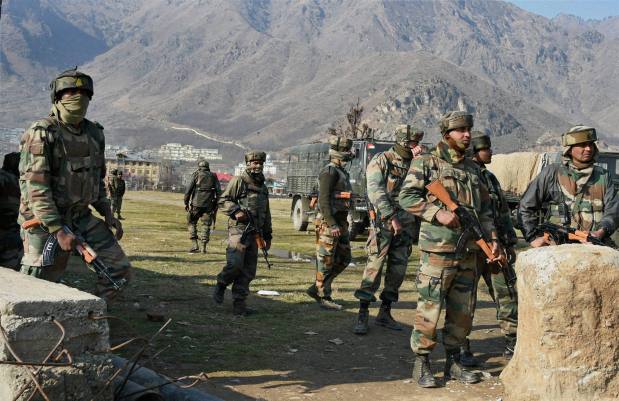 Security personnel take position outside the JKEDI building where militants have reportedly taken refuge after launching an attack on a CRPF convoy at Sampora Pampore, near Srinagar, on Sunday. (PTI Photo)

Srinagar: Fresh firing broke out between militants and security forces today as the operation against ultras holed up in a government building in Pampore area on the Srinagar-Jammu National Highway entered the third day.

Militants inside the Entrepreneurship Development Institute (EDI) building, which is up in flames, engaged security forces in intermittent exchange of fire from 5.30 AM, a police official said.

He said there were no fresh casualties so far today in the operation as security forces have adopted a strategy of wearing down militants physically as well as in terms of ammunition reserves.

Two CRPF jawans and a civilian were killed and nine other jawans injured when militants opened fire a on a CRPF convoy on Saturday afternoon.

The ultras, whose exact number is not known yet, then took shelter inside the EDI building, triggering a stand off.

Nearly 100 civilians staff and students of EDI were evacuated to safety by the security forces from the building.

As the security forces mounted an assault on the building yesterday, they met with stiff resistance from the ultras who are holding vantage points inside the building.

Two officers of the rank of captain and a Lance Naik from the elite Para force of the Army were killed while trying to flush out the militants.

While Captain Pawan Kumar was killed in a pre-dawn exchange of fire, Captain Tushar Mahajan and Lance Naik Om Prakash sustained fatal injuries in the afternoon.