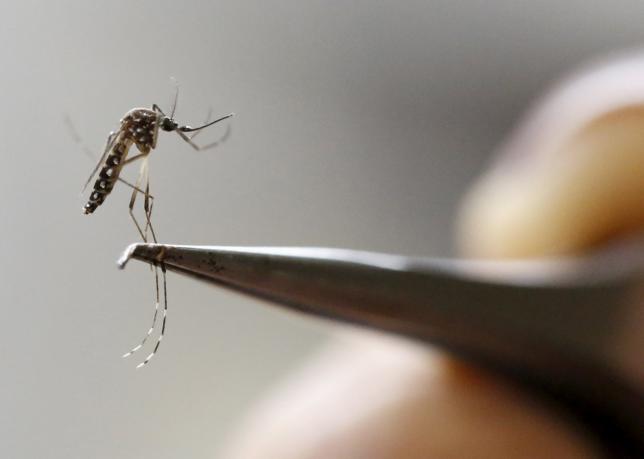 An Aedes Aegypti mosquito is seen in a lab of the International Training and Medical Research Training Center (CIDEIM) in Cali, Colombia February 2, 2016. (Reuters Photo)

Joao Pessao, Brazil: Joint teams of U.S. and Brazilian health workers will fan out across one of Brazil's poorest states on Tuesday in search of mothers and infants for a study aimed at determining whether the Zika virus is causing babies to be born with unusually small heads.

Brazil's health minister, Marcelo Castro, says he is "absolutely sure" mosquito-borne Zika is responsible for a spike in cases of the rare birth defect microcephaly, which sees babies born with small heads and brains and can cause severe developmental problems. But with scant scientific literature published on the matter, some doctors in Brazil and elsewhere say there is not yet enough scientific data to prove the connection.

Jointly run by the Brazil's Health Ministry and the U.S. centres for Disease Control and Prevention, the study is intended to fill that vacuum by comparing babies with microcephaly and their mothers to babies without the condition.

The popular "understanding is that Zika virus (behind the microcephaly spike). How much of that is Zika virus is really one of the important goals of this study," said Erin Staples, a Colorado-based epidemiologist who heads the CDC contingent in Paraiba state. "I do believe there is something occurring that is unique and knowable, but we really need to understand better, mostly so we can prevent this from happening to other generations."

Eight teams made up of one CDC staffer and three Brazilian health workers will knock on the doors of several hundred randomly selected families with infants throughout Paraiba, a northeastern coastal state that is one of Brazil's least developed. The teams hope to recruit at least 130 babies with microcephaly and their mothers and two to three times that number of mothers and babies without the condition, all born in the same areas and at around the same time.

The researchers will take blood samples from mothers and babies that will be sent to labs in Brazil and the United States to test for Zika and dengue, a similar virus also transmitted by the Aedes aegypti mosquito. The idea is to determine whether mothers whose babies have microcephaly were infected with Zika and, if so, when during their pregnancies.

Teams will also be on the lookout for other factors that, possibly in conjunction with Zika, could be behind Brazil's increase in microcephaly, such as a prior infection with dengue, toxoplasmosis or the ingestion of toxins.

"If we can provide some basic information or show a potential association, that will allow us another avenue of how do we prevent this and what do we need to do next," Staples said.

The recruitment process is expected to take four to five weeks, but the timetable will largely depend on how receptive potential subjects are.

At a training session Monday in the state capital of Joao Pessoa, the field teams rehearsed how they will reach out to families and discussed ethical concerns, including how to react to reticence from potential subjects and how many times it is OK to prick babies to try to draw blood.

The language barrier proved a stumbling block at the training session, with the Brazilians and Americans team members often resorting to pantomime as they ran through the scripts they are to recite to potential subjects in this Portuguese-speaking nation.

Priscila Leite, who leads the Health Ministry's contingent, said she expects recruitment numbers to be high given the level of alarm about Zika in Brazil — particularly here in the northeast, the epicentre of the country's Zika and microcephaly outbreaks.

"There is a lot of anxiety out there, and people really want to understand what's going on," she said.

In Paraiba alone, 56 cases of microcephaly have been confirmed since October and 423 suspected cases are under investigation, the Health Ministry says. In previous years, Brazil tended to average around 150 cases nationwide.

sceptics have said microcephaly cases may have been greatly underreported in Brazil in the past because local health officials weren't required to notify the Health Ministry about cases of the condition until November. They also note the microcephaly spike appears to be largely restricted to Brazil, with few cases reported in other countries with Zika outbreaks, such as neighbouring Colombia.

But Staples said she tended to lean toward the Health Ministry's view.

"I come from a paediatric infectious disease background and am also a mom, so looking at these children clinically, they were distinct from other congenital infections I've seen," said Staples, who spent time in Brazil recently as part of a World Health Organisation mission. "The scope and the size of the children who were presenting (microcephaly) at the same time, it really made it apparent to me that there was something unique happening in this situation."