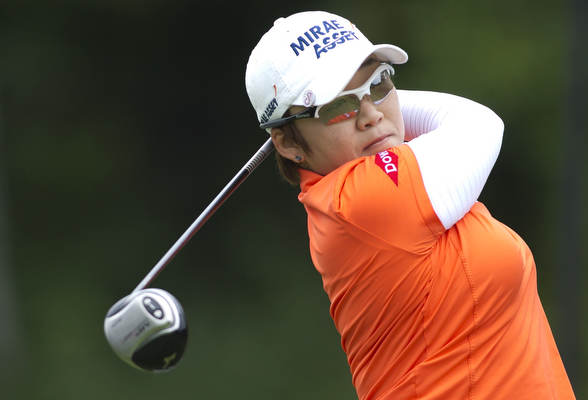 Jiyai Shin of South Korea tees off on the third hole during the championship round at the Canadian Women's Open golf tournament in Mirabel, Quebec August 28, 2011. (Reuters Photo)

Gold Coast, Australia: Former No. 1 Jiyai Shin has added the Australian Ladies Masters to her career victory total after shooting a 4-under 69 for a three-stroke win Sunday at Royal Pines.

The South Korean, who has twice won the Women's British Open, led by two strokes after the third round and completed a 14-under total of 278. England's Holly Clyburn shot a closing 70 to finish in second place.

Tied for third were Nicole Broch Larsen of Denmark (68) and Sweden's Camilla Lennarth (71), four behind Shin. Katie Burnett of the United States shot 71 and was tied for fifth, six behind.

Canadian Brooke Henderson, the highest-ranked player in the field at No. 11, shot 75 and finished at 5-under, nine strokes behind and tied for eighth.

"This is a challenging course and I was very focused," she said. "But I was also relaxed and confident because I have had a lot of experience in the wind."

Three-time winner Laura Davies of England criticised the revamped Royal Pines layout after closing with a 73 to be 16-over for the tournament.

Davies slumped to one of the worst rounds of her career on Saturday with an 85.

"I don't like the changes," said Davies. "The rough is too long, greens far too firm and bunkers very difficult."

At the end of the day, Shin celebrated with traditional Australian fare.