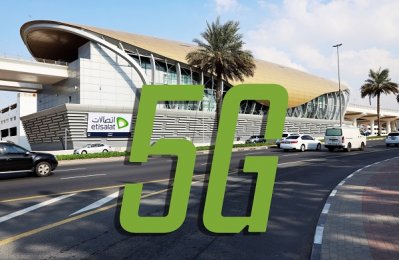 UAE's leading telecom services operator Etisalat today (December 14) announced that it has enabled 5G connectivity at the Etisalat Metro Station, thus making it the first 5G-enabled metro in the Middle East and North Africa (Mena) region.
Etisalat Metro Station is the eastern terminus of Dubai Metro’s Green Line, which was opened to the public in September 2011.
The announcement comes following Etisalat’s major global milestones achieved in 5G network.
The Emirati group had embarked on its 5G journey in 2014 when it started constructing its network with a team of engineers and specialists dedicated to build advanced infrastructure supporting future technology requirements in the region.
Etisalat said through this move it aims to provide metro users with a unique 5G experience riding on blazing speeds of more than 1Gbps and faster response time with latency less than 1 millisecond.
At 20 times faster than 4G and with ultra-low latency, 5G technology allows users to stream live 4k resolution videos, with virtually no lag, and they will enjoy AR/VR services, cloud gaming from anywhere in UAE, robotics, and instant wearable technologies connectivity, said the UAE telco giant in its statement.
The major milestone for both Etisalat and the telecom industry was the launch of the first ‎‎commercial 5G wireless network in May in the UAE, which made it into the first telecom operator in the Mena region to achieve this technological breakthrough and set an industry benchmark.‎
Ookla, the global leader in fixed broadband and mobile network testing applications, data and analysis, recognised Etisalat for being the fastest mobile network in Mena and broadband network in GCC, Africa and Arabian region in 2019 due to its continuous efforts to invest and build one of the world’s most advanced networks.
Expo 2020 was also the first major commercial customer in MEASA to partner with Etisalat on 5G in July 2018 delivering a unique and memorable experience for the millions of visitors, said the statement from Etisalat.‎
In yet another global breakthrough in the 5G journey, Etisalat announced this month that it had achieved over 3.1Gbps download throughput over its 5G Stand Alone (SA) network, it stated.
In November, Etisalat had partnered with Yas Marina Circuit to enable 5G connectivity at the Formula 1 Etihad Airways Abu Dhabi Grand Prix 2019, making it the first 5G powered international racing track in the Mena region.
Etisalat Digital partnered with DMCC in October to transform Jumeirah Lakes Towers (JLT) into an innovative smart and sustainable district, powered by the 5G network.
Smart solutions will be installed across JLT, home to over 16,000 companies and 100,000 people who live, work and visit the area, said the statement.
In August, Etisalat announced the availability of 5G coverage in the world’s tallest and iconic tower ‘Burj Khalifa’ showcasing readiness of the state-of-the-art 5G network and compatibility with industry leading 5G smartphones.
Also among its key achievements this year was Etisalat being named the first mobile operator in Mena region to provide 5G coverage inside an international airport.
Through its network rollout and the pioneering launch of the first 5G handset in the Mena, Etisalat managed to provide UAE customers with an opportunity to experience the power of 5G technology, it added.-TradeArabia News Service