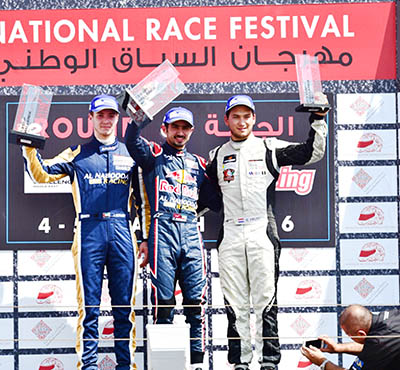 ZAID Ashkanani kept his title ambitions alive after winning race one yesterday in the sixth and final round of the 2015-2016 Porsche GT3 Cup Challenge Middle East, held as part of National Racing Festival (NRF) at Bahrain International Circuit (BIC) in Sakhir.

Shaikh Salman captured the leading grid position in round six of the BIC 2,000cc Challenge, Alneaimi continued his season dominance with pole in round three of the Bahrain Superbike Championship (BSBK), and Attwood was best in qualifying in the season-opening round of the Bahrain Motorcycle Racing (BMR) 600.

The NRF continues today with a total of seven races on the cards. Action will be held from 9am to 5pm. All are welcome to attend and see some of the region’s best in action. Tickets are BD2 apiece. They can be purchased at the gate.

In the Porsche GT3 Cup opening race, Ashkanani started on the front row from second on the grid. He managed to quickly dive into the lead in the first lap and proceeded to control the race. He completed the 12-lap sprint around BIC’s 5.412-km Grand Prix track in 25 minutes 10.891 seconds. It was his first victory of the season.

“I am really happy with my performance today,” Ashkanani said. “It’s my first win of the season and it has felt like a long time coming. It was a very tough battle with my teammate Jeffery [Schmidt], he was really putting the pressure on me from behind but I managed to retain my position and finish in first.”

Schmidt, who is the championship leader, put Ashkanani under intense pressure in the final stages of the race and was classified a mere 0.267s behind. Despite being the runner-up, Schmidt remains the favourite to clinch the drivers’ overall crown. He goes into the season’s final race today with a 24-point lead over Ashkanani.

The top three overall out of the 11 cars were also the winners in the Gold class. The silver category was won by Prince Saud Al Faisal ahead of Wolfgang Triller, while the bronze was claimed by Rob Frijns. Shaikh Jaber bin Ali Al Khalifa of Team Bahrain finished second in their category, while Fawaz Algosaibi was third.

After a long, competitive and enthralling campaign, the final outcome of the driver’s championship across all three individual categories will be decided today.

Race two is scheduled for 11.45am. Qualifying will be held shortly prior at 10.25am.

Meanwhile, Shaikh Salman claimed what is surprisingly his first pole of the season in the BIC 2,000cc Challenge.

Heading into round six with a comfortable lead on the points standings, Shaikh Salman started things off today without participating in practice but managing to outpace the rest of the 10-car field in qualifying.

Competing along BIC’s 2.55-km Inner Circuit, the former champion registered a fastest lap of 1:18.047 in his Honda Civic to go atop the timesheet.

Mohammed Faqihi, also driving a Civic, qualified second 1.584s off the pace. Alex Longden in the BMW 3 Series/F20C was third 1.644s back.

In the BSBK, Alneaimi maintained his impressive form with the best times in both qualifying and practice from a 16-rider field.

Alneaimi raced to pole with a fastest lap of 1:08.154 around the Inner Track. Fahad Alsuwaidi was second with a 2.593s gap, while Ali Al Shammari was third 3.527s back.

The first race of the BSBK is scheduled for 2.30pm today followed by race two at 3.40pm.

Finally, in the BMR 600, Attwood got his season off to a positive start with a fastest qualifying lap of 1:20.956. He had also topped the practice timesheet earlier yesterday.

John Beddall followed 2.283s behind while Chris Rabie was 3.346s adrift amongst the six riders competing.