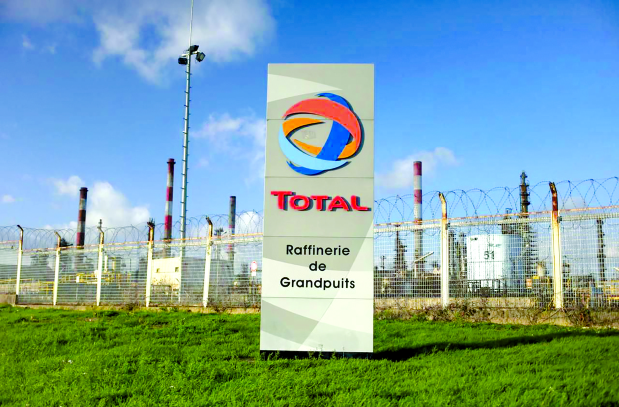 The Grandpuits refinery will continue production until December 30

PARIS: Total’s Grandpuits refinery near Paris is producing at a reduced rate after the CGT union voted to halt output as part of nationwide protests against a pensions reforms, the French energy company said yesterday.

A Total spokesman said the 102,000 barrels-per-day refinery would continue to produce until December 30 when the union will hold another general assembly meeting.

It can take several days to securely shut down refinery operations, while Total may be able to keep it running for a short period by using rotating teams of non-unionised workers.

The spokesman said three of Total’s other refineries in France – Normandy, Feyzin and Donges – were operating normally yesterday, with products leaving the refineries.

At its La Mede biorefinery, products were still being blocked from leaving due to the industrial action.

The hardline CGT trade union has vowed to ramp up protest action, particularly in the oil sector and including shutting down oil facilities, to try to force the government to withdraw the planned reforms.

French ecology and energy ministry reiterated yesterday that six of France’s seven crude oil refineries were producing and distributing normally, and only Grandpuits was facing difficulties shipping its products.

“French oil logistics is robust because of a dense network of 200 depots, linked to refineries by pipelines, river barges, or rail, and distribution by trucks for the last kilometres to service stations,” the ministry said in a statement.

It added that only two depots were facing supply difficulties.

“There is therefore no cause for concern,” it said, cautioning drivers against rushing to fill up tanks. The ministry said French oil stocks were at a good level.

Prime Minister Edouard Philippe’s office said it would restart talks with unions on pension reform on January 7. Separate talks will also be held with teachers’ and hospital workers’ unions from January 13, the government said.

Unions have already scheduled more demonstrations for January 9 against the reforms, which would scrap special regimes for sectors like the railways and make people work to 64 to draw a full pension.