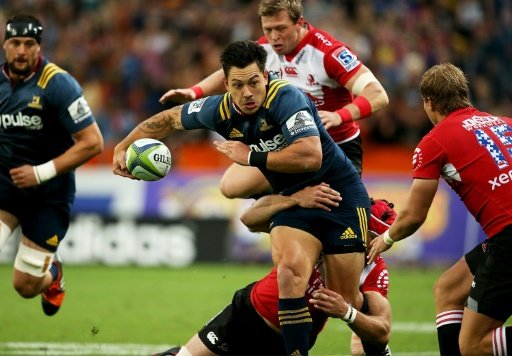 Rob Thompson of the Otago Highlanders (C) is tackled during their Super Rugby match against the Golden Lions, at Forsyth Barr Stadium in Dunedin, New Zealand, on March 12, 2016. (AFP Photo)

Wellington: A disputed penalty try kept the Coastal Sharks up with the ACT Brumbies as the only unbeaten teams after round three of Super Rugby at the weekend.

The Sharks downed the previously unbeaten Western Stormers 18-13 while the Brumbies boosted their title credentials with an impressive 31-14 win over Western Force.

The Golden Lions tasted defeat for the first time, going down to the Otago Highlanders 34-15.

At the opposite end of the table, the bid by Japanese newcomers the Sunwolves to showcase Asian talent in the debut match in Singapore fell flat when they yielded an 18-point lead in the second half to give the Central Cheetahs their first win 32-31.

The Cape Town thriller between the Sharks and Stormers turned early in the second half when the Sharks drew level 10-10 courtesy of a penalty try and a yellow card for Stormers flanker Siya Kolisi.

Back-row forward Kolisi was accused of deliberately kicking the ball from the hands of Sharks scrum-half Cobus Reinach as he attempted to score, however television replays indicated the contact may have been accidental.

But there was no doubt about the Brumbies' superiority over the Force as they raced to a 17-0 lead midway through the first half.

The Force did manage one try before half-time, only for the Brumbies to resume their charge in the second half for a confidence boosting four tries to two win before heading to South Africa to play the Stormers next week.

The Lions winning run came to a sudden halt in Dunedin when the Highlanders scored three converted tries, all from 70-metre moves, in a 15-minute burst just after half-time.

It lifted the defending champions from a 10-3 lead at the break to a 24-3 advantage and while the Lions came back with two late tries they never looked like hauling in the deficit.

Lima Sopoaga finished with 14 points and a 100 percent kicking success rate as he challenges Aaron Cruden and Beauden Barrett to be number one All Blacks fly-half in the slot vacated by Dan Carter.

The Sunwolves were on track for more than half of their game against the Cheetahs to score a historic first victory in the debut Super game in tropical Singapore as World Rugby looks to promote the game in Asia.

In the bottom-of-the-table clash, the Sunwolves led the Cheetahs 31-13 early in the second half before they conceded 19-unanswered points with Boom Prinsloo scoring the winning try for the South African side in the 75th minute.

The Waikato Chiefs, still fuming from their loss to the Lions last week, travelled to South Africa and took their frustrations out with 58-24 thrashing of the hapless Southern Kings.

Melbourne Rebels fly-half Jack Debreczeni was also in the points with a personal tally of 20 in their 25-23 win over the Queensland Reds.

The Wellington Hurricanes, beaten finalists last year, held off a late charge from the Auckland Blues to notch a 23-19 victory for their first win of the season.