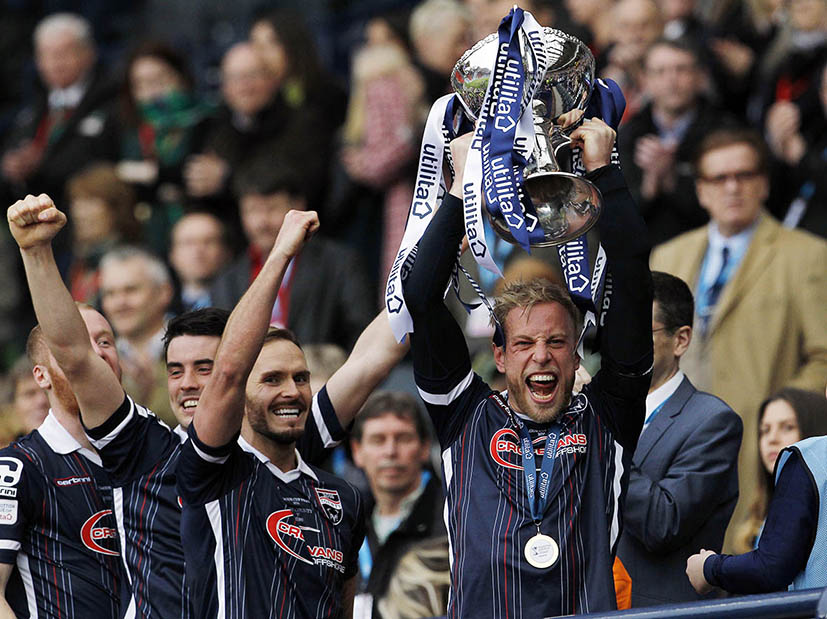 Hibs started the second half strongly, but the introduction of substitute Brian Graham gave County more purpose and the striker had two efforts chalked off for offside before Schalk tapped home in the 90th minute.

It is a first major cup win for the Highland club, who only joined the Scottish Football League in 1994.

At Hampden, both sides made two changes, with County's Graham making way for Schalk, while Ian McShane replaced Jonathan Franks.

Hibs' Marvin Bartley was brought into midfield for the injured Dylan McGeouch, with top scorer Jason Cummings coming back in for James Keatings.

It was Cummings who gave the 30,000 Hibs fans packed into Hampden the first thing to shout about when his ambitious strike from 25 yards was tipped over the bar by Gary Woods.

However, it was County who took the lead when Jackson Irvine pounced on a slack pass from Kevin Thomson and sent Gardyne through on goal.

Bartley appeared to have made a last-gasp saving tackle, but the ball came back off goalkeeper Mark Oxley to Gardyne, who fired into the empty net.

With half-time looming, the Edinburgh side hauled themselves level.

Liam Henderson's corner from the right was headed on by David Gray and fell to Fontaine, who swivelled to rifle a fierce strike beyond Woods.

The momentum continued to swing in Hibs' favour at the start of the second half with Henderson's shot deflected wide before he set up Stokes for a shot on the turn that flashed inches wide of the post.

However, the introduction of Graham changed the direction of the game and the striker soon had a goal disallowed after his lobbed effort over Oxley was ruled out for a tight offside decision after Schalk had played him in.

The County striker was to suffer more disappointment in the 80th minute when he outjumped Oxley to head into the net, only for his effort to be ruled out after referee Kevin Clancy harshly decided that he had fouled the goalkeeper.

However, that disappointment disappeared as County grabbed a dramatic winner.

Gardyne's cross was knocked into Schalk's path by Hibs' goal hero Fontaine and the Dutch striker had the simple task of tapping the ball in from close range to send the Highland club's fans wild.