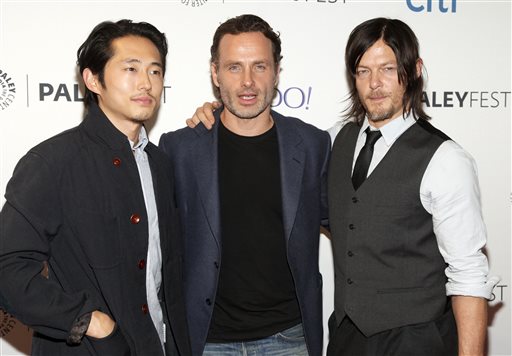 Los Angeles: As every aficionado of the zombie apocalypse knows, the undead cannot swim.

From the films of George A Romero to AMC's hit 'The Walking Dead,' one of the best ways of escaping a horde of flesh-eaters is fleeing across a river.

The cast and creator offered fans an exclusive glimpse at scenes from the upcoming second season of the prequel series at the PaleyFest television festival in Los Angeles on Saturday.

The show's gang of survivors are seen setting out on the high seas in a bid to escape the undead.

But one clip shows Nick, played by British actor Frank Dillane, underwater and about to be attacked by a zombie on the surface.

"Zombies can't swim. They can wade but they sink," showrunner Dave Erickson told the audience at Hollywood's Dolby Theatre.

"So it was actually something we experimented with when we shot the first episode, with varying degrees of success.

"But we've figured out the best ways to shoot water zombies. They don't drown. They keep floating back up."

The first season of 'Fear the Walking Dead,' which was filmed in Los Angeles and Vancouver on Canada's west coast, debuted in August last year.

Over six episodes it went on to become the highest-rated first season of any series in cable history, with an average of 11.2 million viewers.

Production moved to Baja California, in Mexico, for the second season, which kicks off an extended 15-episode run on April 10 on AMC.