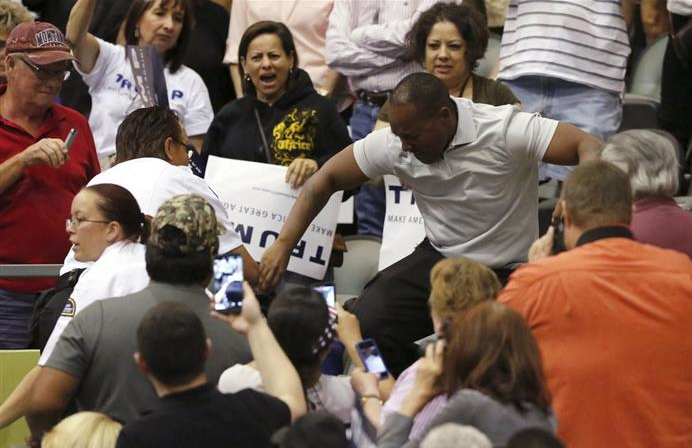 A member of the audience, right, stomps on a protester as Trump speaks during a campaign event in Tucson, Arizona. (Reuters Photo)

Washington: Republican presidential candidate Donald Trump said that "professional agitators" bore much of the blame for violence at his rallies as video showed a protester being beaten and another apparently being grabbed by Trump's campaign manager.

Speaking on ABC's This Week, Trump defended campaign manager Corey Lewandowski and declined to condemn supporters who have attacked protesters at his increasingly chaotic rallies.

Nor did he back down from his warning that there would be riots in the streets if the Republican Party denied him the nomination for the November election.

"I don't know what's going to happen, but I will say this, you're going to have a lot of unhappy people," he said.

Scenes of mayhem have become increasingly common at the billionaire businessman's rallies as he secures his position as the Republican frontrunner despite opposition from many senior party officials. Trump has on occasion said that he would like to punch protesters himself.

Television footage from an Arizona rally on Saturday showed a man punching and kicking a protester as he was led out of the event. Another video appeared to show Lewandowski grabbing a protester by the back of his shirt.

Trump declined to condemn the violence and said it was often provoked by protesters, who briefly blocked a highway leading to an Arizona rally on Saturday.

"These people are very disruptive people. They're not innocent lambs," he said.

He also defended Lewandowski and said a security official had actually grabbed the protester. Lewandowski also manhandled a reporter last week, according to the Washington Post.

"I give him credit for having spirit," he said of Lewandowski.

"All of the candidates for president ought to be discouraging that kind of activity, because people in the audience tend to listen to those who are speaking," Senate Republican Leader Mitch McConnell said on ABC.

"The sheriff there was in the crowd and the Secret Service is there and that's their job to do it," he said on ABC. "Condoning violence is not the answer."