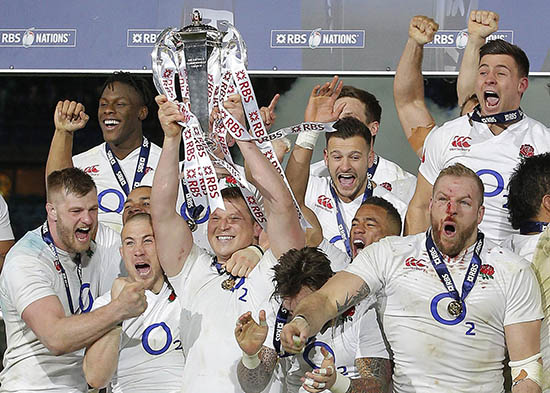 PARIS: England ran in three tries to complete their first grand slam triumph since 2003 with a 31-21 Six Nations victory over arch-rivals France on Saturday.

The visitors produced a powerful display but were ill-disciplined at times, enabling scrumhalf Maxime Machenaud, who scored all France’s points from penalties, to keep his team in contention throughout.

First-half tries by Danny Care and Dan Cole and one more after the break by Anthony Watson, the rest of the points coming from Owen Farrell’s boot, proved enough to give England the win they craved.

“It’s a nice first step for us but that’s a small step and there are much larger steps to come, starting with the Australian tour (in June).”

On a crisp evening on the outskirts of Paris, they sealed their 13th all-time clean sweep, two more than next-best Wales, bouncing back in style from last year’s early World Cup exit to hand new Australian coach Eddie Jones a perfect debut campaign.

England, who made sure of winning the tournament for the first time since 2011 with a win over Wales last week, lost Dylan Hartley for the closing stages.

The England captain left the pitch on a stretcher after a clash with substitute prop Uini Atonio.

France, also rebuilding with a new coach in former Toulouse boss Guy Noves, started the tournament in promising fashion with victories over Italy and Ireland before defeats by Wales and Scotland ended their title hopes.

The two sides had traded penalties when Care escaped from a ruck and sprinted unchallenged to touch down between the posts, handing Farrell an easy conversion.

France flyhalf Francois Trinh-Duc then limped off to be replaced by Jules Plisson.

Forward pressure brought England’s second try from Cole and the visitors would have been in control had they not let Machenaud showcase his kicking ability.