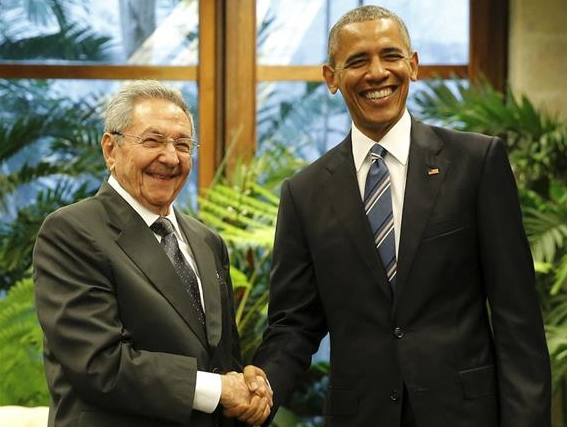 Obama and Castro shake hands during their first meeting on the second day of Obama's visit to Cuba, in Havana. (Reuters Photo)

Obama arrived in Cuba on Sunday for the first visit by a US president in almost 90 years, achieving a goal for his final year in office that became possible after secret talks led to a 2014 agreement to normalise relations.

The opening ended decades of US efforts to force Cuba to change through isolation. But Obama is under pressure from critics at home to push Castro's government to allow political dissent and to further open its Soviet-style state-run economy.

Obama began his first full day in the symbolic heart of Cuba's Communist system, starting in Revolution Square, where for decades Raul Castro's brother, Fidel Castro, led million-strong rallies against the evils of US "imperialism."

"It is a great honour to pay tribute to Jose Marti, who gave his life for independence of his homeland. His passion for liberty, freedom, and self-determination lives on in the Cuban people today," Obama wrote in a guest book there.

Marti was a 19th century poet and writer whose activism helped spur Cuba's freedom from Spain and whose legacy was later adopted by Fidel Castro's revolutionaries as a symbol of anti-imperialism.

Obama then moved on to the adjacent Palace of the Revolution, where the Castros have led Cuba's resistance to US pressure going back decades. A US presidential visit to the inner sanctum of Cuban power was unthinkable before Obama and Raul Castro's rapprochement in December 2014.

Obama and Castro have met three times before, but Monday's meeting was set to be the most substantial as the two men move on from last year's restoration of diplomatic ties and attempt to rebuild the bilateral relationship.

Inside the palace, Castro and Obama stood shoulder to shoulder while a military band played the Cuban national anthem and then the US anthem, and then they walked past a military honour guard.

Castro was all smiles as he greeted Obama. But he has said Cuba will not waver from its 57-year-old revolution. Government officials say the US needs to end its economic embargo and return the Guantanamo Bay naval base to Cuba before the two countries can enjoy normal relations.

Monday's formal ceremony contrasted with Obama's lower key arrival on Air Force One in Havana on Sunday. Castro did not meet the plane and there were no military honours.