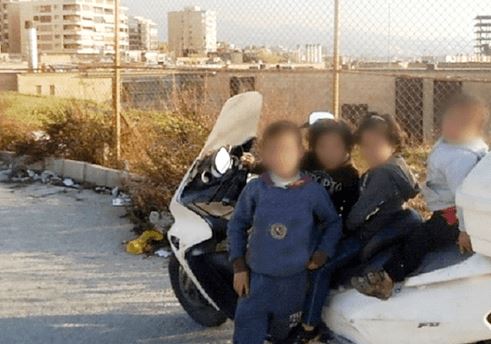 American author claimed that the woman offered to sell the four children for $1000 or $250 each for any one of them. (Image courtesy: MWC News)

Beirut: An American has confessed to having purchased four children near Ramlet el Baida beach in Beirut from a stressed-out Syrian woman, who was apparently not their mother.

She claimed to be their neighbour in Aleppo and said that the four children lost their parents in war.

According to a report in MWC News, the American author claimed that the woman offered to sell the four children for $1000 or $250 each for any one of them.

“She and the children had ended up in Lebanon but she explained to me that she was afraid to register with the UNHCR because she is an illegal and has no ID. The woman told me that she could no longer take care of the shivering children but did not want to just leave them on the street,” writes Franklin Lamb who purchased the four children by paying $600.

The writer gave a detailed account of exploitation of children and women in war-stricken Syria and what made him pay $600 to buy those four children.

“I thought about the scale of exploitation faced by Syrian refugee children in Lebanon, of the tens of thousands sleeping rough through these frigid nights and the countless thousands who every day are easy prey for abuse. I thought about the fact that Refugee relief efforts in Lebanon are chronically underfunded and that even UN high commissioner for refugees (UNHCR) has been forced to cut aid to all but the neediest of refugees due to insufficient funds,” he wrote.

In his confession, he requested readers to help such children in whatever way they can.

“All of us must do what we can to get these children from Syria a safe environment and a chance to play and to be children. Dear reader, if you happen to be in this area and by chance come upon a need such as this, please make these angels feel protected and safe, make them warm, get them clean clothes, feed them, get them a medical examination, contact authorities or NGO’s for help. And buy them a doll to love. Knowing you may not get immediate assistance, also inquire about schooling,

“Most importantly, dear reader, find them a mother. Before long, hopefully they will be in a loving home until the hell next door ends. Then these children, the future of their country, can return home and soon help restore and eventually rebuild Syria.