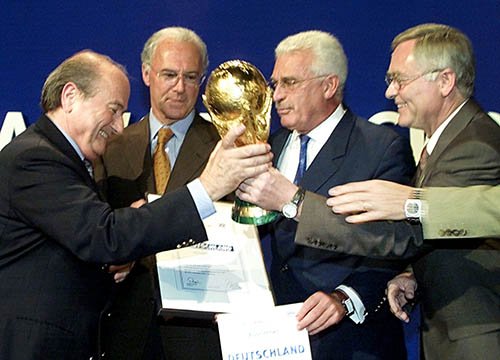 In this July 6, 2000, file photo, Fifa president Sepp Blatter, left, hands over a copy of the soccer World Cup trophy to the German bid team, Franz Beckenbauer, second from left, Fedor Radmann, second from right, and Horst R. Schmidt, right, after Fifa announced that Germany will host the 2006 World Cup

Geneva: Fifa’s ethics committee yesterday launched an investigation targeting six people over their roles in the bidding that awarded the 2006 World Cup to Germany, with the probe partly focused on alleged bribery.

Those targeted include Franz Beckenbauer, the German football legend and World Cup organising committee chief who is suspected of bribery, and Wolfgang Niersbach, former German football federation (DFB) president, who is being probed over possible failure to report Fifa ethics violations.

In a statement, Fifa’s ethics committee said it opened the inquiry following the release of a report commissioned by the DFB into the 2006 World Cup bidding.

That report, released on March 4, said it could not rule out that Germany bought votes to secure the tournament, and linked Beckenbauer to a “mysterious” deal with disgraced Fifa official Jack Warner.

Along with Beckenbauer, Fifa’s in-house prosecutors are investigating three other ex-DFB officials for “possible undue payments and contracts to gain an advantage in the 2006 Fifa World Cup host selection.”

Helmut Sandrock, another former DFB secretary general, is along with Niersbach being probed for allegedly failing in his “duties of disclosure”.

The launch of a fresh corruption investigation comes as Fifa’s new president Gianni Infantino is trying to turn the page on the scandal-ridden administration led by Sepp Blatter, whose presidency ended in disgrace last month.

The ethics committee statement said the German probe may widen further, noting that “the list of possible violations may be supplemented as additional information becomes available.”

The DFB inquiry, carried out by the law firm Freshfields, outlined a money trail linking Beckenbauer, former Adidas chief Robert Louis-Dreyfus and Qatar’s Mohammed bin Hammam, who has since been banned from football for life over corruption claims.

A central issue in the German bid was a 10-million Swiss franc ($8m, according to the exchange rate at that time) payment that Spiegel said was borrowed by the DFB from the late Louis-Dreyfus.

It said the money was to buy the votes of four Asian members of Fifa’s 24-strong executive committee.

Separately, 39 people and two companies have also been charged with corruption by the US justice department, including many of Blatter’s former top deputies.