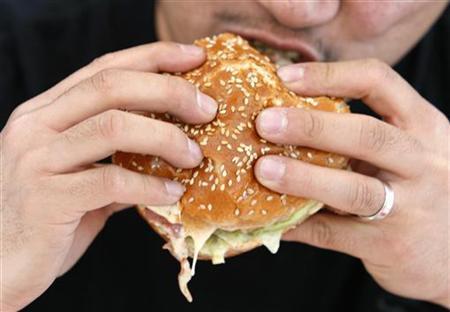 A man takes a bite from a hamburger in Hollywood, California, October 3, 2007. (Reuters Photo)

Telling patients about their genetic risk for disease doesn’t usually lead to healthy behaviour changes like eating better or exercising more, according to a new analysis of existing studies.

In general, telling patients about their DNA-based risk estimates for these conditions did not affect their health behaviours or motivation to change behaviour and did not lead to negative effects like depression or anxiety, the researchers reported in BMJ.

Most of the evidence was low-quality, however, the authors note.

Genetic tests have several possible uses but this review suggests that such tests have no role in policies aimed at changing behaviour to improve population health, said senior author Theresa M. Marteau of the Behaviour and Health Research Unit at the University of Cambridge in the U.K.

“Two other possible uses include providing people with information to reduce uncertainty they may have about their chances of developing a disease even if the risk cannot be averted,” as in the case of the severe neurological disorder Huntington’s disease, and in categorising people by risk to see who could benefit from interventions like surgery or medication, she said by email.

“Information is at best a weak intervention for changing behaviour,” Marteau said. “We just have to reflect on the failure of most of us to keep our New Year resolutions . . . to realise that there is too often a gap or rather a chasm between our intentions and our behaviour.”

Physical and economic cues, like serving food with smaller tableware, may be a more effective way to prompt healthy behaviour change, she said.

Genetic risk information may play a role in behaviour change, but not on its own, said U.S. National Institutes of Health Director Dr. Francis Collins, who was not part of the new review.

“Inducing behaviour change for diet and exercise and is extremely difficult, and these subjects were not offered any support,” Collins told Reuters Health by phone. “Even if they thought they should do something about it there was no assistance.”

Linking genetic risk assessments with interventional support systems and resources like wearable fitness trackers, as is happening now in the federal government’s Precision Medicine Initiative, may have better results, he said.