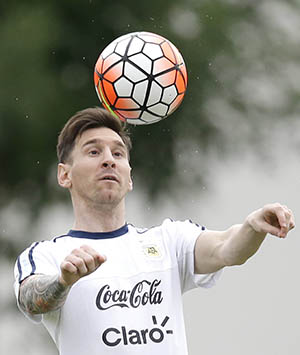 Messi, meanwhile, missed the opening four matches of Argentina’s 2018 qualifying campaign earlier this season after suffering a knee injury while on club duty for Barcelona in September.

The five-time Fifa World Player of the Year could not be returning at a better time for Argentina, who face a demanding trip to Santiago today to face reigning champions Chile in a rematch of the Copa America final.

However, the 2014 World Cup runners-up breathed life into their campaign with a 1-0 away win against Colombia in November, a crucial victory that lifted them from near the bottom of the table to within striking distance of the automatic qualifying positions.

Messi’s return, however, has been offset by a wave of injuries that has deprived Argentina coach Gerardo “Tata” Martino of a slew of foreign-based stars, most notably Juventus’s in-form striker Paulo Dybala, Paris Saint-Germain’s Javier Pastore and Benfica’s Nicolas Gaitan.

With Carlos Tevez dropped, Martino has turned to unheralded Argentina-based forward Lanus to bolster his attacking options for today’s clash.

The 28-year-old was a team-mate of Messi’s in the Argentina squad that won the gold medal at the 2008 Olympics but is yet to win his first full international cap for the two-time World Cup winners.

Uruguay striker Suarez, meanwhile, is relishing the prospect of being reunited with his international team-mates for the first time in nearly two years when La Celeste travel to Recife to take on Brazil tomorrow.

“Obviously after a long time without seeing them (Uruguay team mates and staff) it will be a strange feeling, but there is also the pleasure of seeing them all again. I haven’t seen them for nearly two years,” Suarez said.

“There is pleasure and satisfaction that (the ban) is all over and now I can enjoy being with them again,” added the 29-year-old, who has scored 37 goals in all competitions for Barcelona this season.