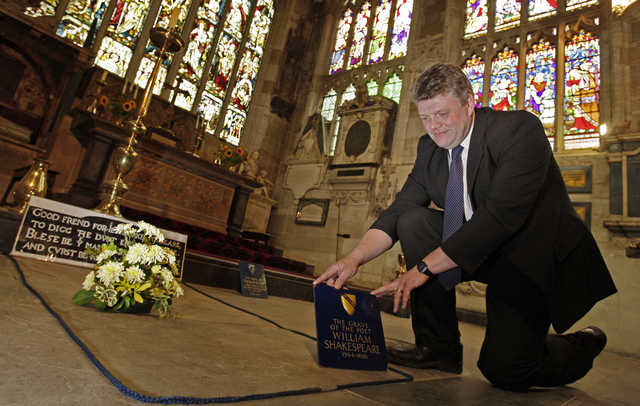 Head Verger Jon Ormrod tends to the grave of Shakespeare in the Chancel of Holy Trinity Church in Stratford Upon Avon, England. (AP File Photo)

Archaeologists who scanned the grave of William Shakespeare say they have made a head-scratching discovery: His skull appears to be missing.

Researchers used ground-penetrating radar to explore the playwright's tomb in Stratford-upon-Avon's Holy Trinity Church. Staffordshire University archaeologist Kevin Colls, who led the study, said they found "an odd disturbance at the head end," with evidence of repairs some time after the original burial.

He said the finding supports a claim — first made in 1879 but long dismissed as myth — that the Bard's skull was stolen by grave-robbers in the 18th century.

"It's very, very convincing to me that his skull isn't at Holy Trinity at all," Colls said.

Church records say Shakespeare was buried in his home-town church 160km northwest of London, on April 25, 1616, two days after his death at the age of 52. His wife, Anne Hathaway, daughter and son-in-law were later buried alongside him.

Colls and geophysicist Erica Utsi found the family members lie in shallow graves in the church chancel, rather than in a single vault. There are no traces of nails or other metal, suggesting they may have been buried in cloth shrouds rather than coffins.

Colls said the findings, which feature in a documentary airing Saturday on Britain's Channel 4 television, would "undoubtedly spark discussion, scholarly debate and controversial theories" — and some Shakespeare scholars remained skeptical.

Michael Dobson, director of the Shakespeare Institute at the University of Birmingham, said the grave-robbing claim was first made in an 1879 short story.

A skull takes a starring role in Shakespeare's Hamlet in which the Danish prince addresses the bony cranium of a man he once knew: "Alas, poor Yorick!"

But Dobson said it would have been unusual for anyone to want a writer's skull at the time of the alleged theft.

"There wasn't a huge fashion for robbing literary graves in the 18th century," he said.

Holy Trinity's vicar, Patrick Taylor, said he was not convinced there is "sufficient evidence to conclude that his skull has been taken" — and there are no plans to disturb the grave to find out for sure.

"We shall have to live with the mystery of not knowing fully what lies beneath the stone," he said.

That may be a wise decision in light of the warning inscribed on Shakespeare's gravestone:

To dig the dust enclosed here.

Blessed be the man that spares these stones,

And cursed be he that moves my bones."