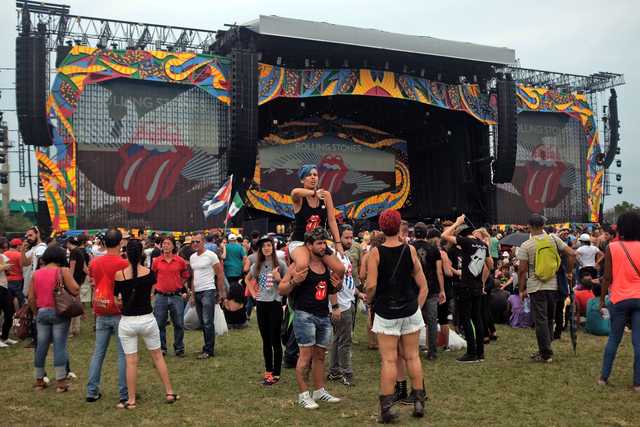 Fans waits near a stage where Rolling Stones will perform at "Ciudad Deportiva" in Havana. (AFP Photo)

Tens of thousands of Cubans flocked to the first Rolling Stones concert ever played on the communist island, symbolically breaking with a repressive past in which even listening to rock 'n roll was illegal.

With no charge for entry, Cuban state media estimated that as many as 500,000 people could cram into Havana's Ciudad Deportiva sports complex – and thousands more into surrounding streets.

Some slept out overnight to get the best positions. Many others began streaming in more than six hours before the Stones' frontman Mick Jagger was to get the gig started at about 8:30pm.

Police were out in force and an alcohol ban was in place as fans flocked towards the 80-metre stage which is flanked by 10 giant video screens.

"Rock music, I hope, will open everything else – politics, the economy, the Internet. We're 20 years behind absolutely everything," Escobar said.

With no tickets on sale, it was impossible to confirm estimates that between half a million and a million people would come.

What was sure was that the Stones were putting on the most grandiose show ever staged in Cuba, where no other comparable rock group has come to play – put off by lack of infrastructure and Cubans' lack of spending power.

The Cuban contribution to the technical side of the concert was decidedly lower-key. As nearly everywhere else in Cuba, there was no wifi signal at the sports complex, and as the crowds grew even cellphones stopped working.

The band called on fans via Twitter to vote for one of four songs – Get Off My Cloud, All Down the Line, She's so Cold, and You Got Me Rocking – to be included on the playlist. But few in Cuba, where Internet is not widely available, have access to Twitter.