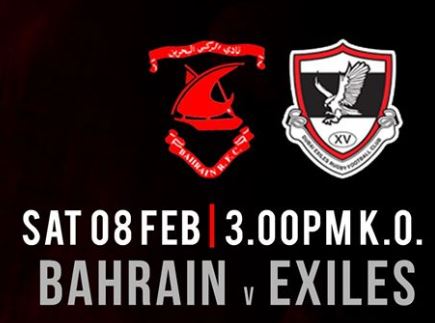 A huge crowd is expected at the Janabiya ground as the visitors are the only team to beat Bahrain in the past two seasons, albeit in the away fixtures staged at the 7s Stadium in Dubai.

Adam Wallace, BRFC head coach, is convinced Bahrain fans, known affectionately as the Redwall, will play a crucial role in securing victory. “Dubai Exiles are formidable opponents and no stranger to high pressure rugby in front of the Redwall having played in the last two finals at our ground,” he said.

“A large and physical outfit, the Exiles are the only team to beat us and did so once again at their home ground.

“But by picking up a bonus point in every game so far this year, we sit seven points clear of the Exiles who still have a game in hand.

“There is no doubt that the Dubai outfit will be looking for a repeat of the performance that saw them triumphant back in October, but we have grown stronger in defeat and are up to the task ahead.”

With the home team winning eight out of the last 10 fixtures, the players will be relying on the support from the sidelines to ‘tip the scales in Bahrain’s favour’, Wallace added.

Club chairman Mike Cunningham described the coming fixture as a ‘massive game’ for both teams and believes it will almost certainly decide the winner of the league and the location of this year’s West Asia Premiership Final.

“Here in Bahrain we have maintained a 100 per cent record against all opposition over the last two seasons and will be working hard to keep that record on Saturday,” he explained.

BRFC will host two further league games – both at home – against the Abu Dhabi Harlequins followed by the Jebel Ali Dragons.

This year there will be no semi-final – with only the first and second-placed sides playing off for the title. The venue for the clash will be the home of the team finishing top of the league.

The West Asia Rugby Premiership (WAP) is the top tier league of Gulf rugby with six regional clubs participating in the league format competition which runs from September to May each season.

With all teams playing each other home and away, it normally culminates at the end of the season with a top four knockout-style tournament.

However, as this year’s will be decided in a clash between the top two, coming top and securing home advantage remains crucial, so victory on Saturday means everything.

BRFC is also planning a rugby fiesta on Saturday with a full afternoon and evening of sport to enjoy. Its veterans team, the Golden Oldies, start the action against the Royal Navy at noon.

Bahrain 1st XV’s WAP match against Dubai Exiles kicks off at 3pm, after which live Six Nations rugby featuring Wales vs Ireland and Scotland vs England will be beamed outdoors on a large screen.