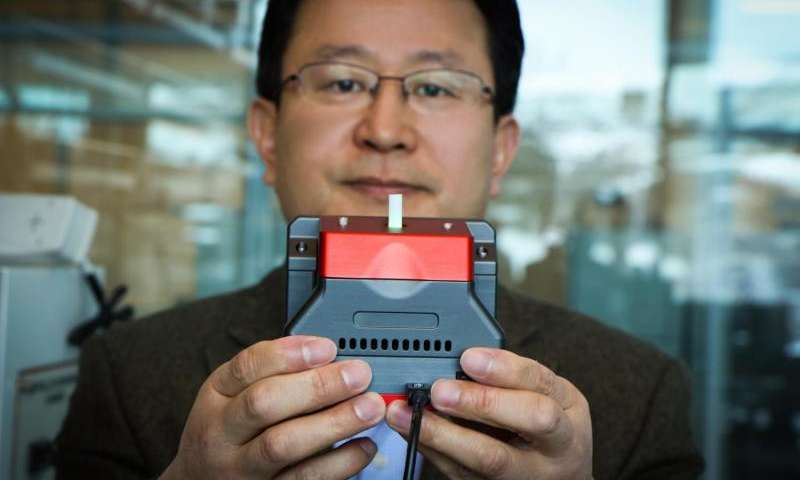 University of Utah materials science and engineering professor Ling Zang holds up a prototype handheld detector his company is producing that can sense explosive materials and toxic gases. His research team developed a new material for the detector that can sense alkane fuel, a key ingredient in such combustibles as gasoline, airplane fuel and homemade bombs. (Image courtesy University of Utah College of Engineering)

Washington: Scientists have developed a new type of fibre material for a handheld scanner that can detect leaks in oil pipelines and planes, or locate fuel-based explosives. Alkane fuel is a key ingredient in combustible material such as gasoline, airplane fuel, and oil - even a homemade bomb.

Yet it is difficult to detect and there are no portable scanners available that can sniff out the odourless and colourless vapour.

Currently, there are no small, portable chemical sensors to detect alkane fuel vapour because it is not chemically reactive. The conventional way to detect it is with a large oven-sized instrument in a lab.

"There's no way it can be used in the field. Imagine trying to detect the leak from a gas valve or on the pipelines. You ought to have something portable," said Ling Zang, professor at University of Utah in US.

Researchers developed a type of fibre composite that involves two nanofibres transferring electrons from one to the other.

"These are two materials that interact well together by having electrons transferring from one to another," said Ben Bunes, a postdoctoral fellow at University of Utah.

That kind of interaction would then signal the detector that the alkane vapour is present. Vaporsens, a University of Utah spin-off company, has designed a prototype of the handheld detector with an array of 16 sensor materials that will be able to identify a broad range of chemicals including explosives.

This new composite material will be incorporated into the sensor array to include the detection of alkanes.

If leaks from pipelines are not detected early enough, the resulting leaked oil could contaminate the local environment and water sources.

Typically, only large leaks in pipelines can be detected if there is a drop in pressure. The portable sensor - when placed along the pipeline - could detect much smaller leaks before they become bigger.

Fuel for aircraft is stored in removable "bladders" made of flexible fabric. The only way a leak can be detected is by seeing the dyed fuel seeping from the plane and then removing the bladder to inspect it.

The new sensors could be placed around the bladder to warn a pilot if a leak is occurring in real time and where it is located.

The scanner will also be designed to locate the presence of explosives such as bombs at airports or in other buildings.

The study was published in the journal ACS Sensors.