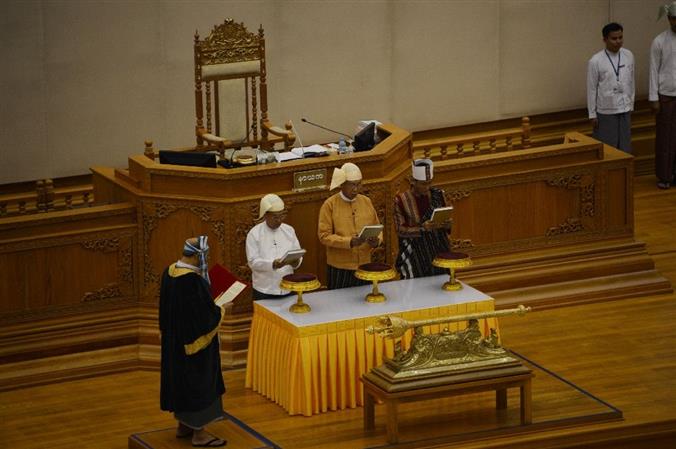 Naypyidaw, Myanmar: A close aide to Aung San Suu Kyi was sworn in as Myanmar's president on Wednesday, a role that will see him act as a proxy for the pro-democracy figurehead and carry the hopes of a nation emerging from military rule.

Suu Kyi, 70, is barred from becoming president by the junta-scripted constitution but has declared that she will steer the government anyway.

The handover at the junta-built parliament in the capital Naypyidaw marks the final act of a prolonged transition since Suu Kyi's National League for Democracy party swept the November elections.

The NLD won 80 % of parliamentary seats, handing them a massive public mandate to rule after generations of army domination.

Wearing a collarless shirt in the NLD's peach-coloured parliamentary colours, the bespectacled Htin Kyaw pledged to be "faithful to the people of the republic of the union of Myanmar".

"I will uphold and abide by the constitution and its laws. I will carry out my responsibilities uprightly and to the best of my ability," added the 69-year-old, who is an old school friend of the Nobel Laureate.

The cabinet was later sworn in by the speaker in a colourful line-up that included ministers from ethnic regions and a blue-clad Suu Kyi -- who holds a clutch of cabinet positions including that of foreign minister.

Yet three men in military uniform were also present at the swearing in -- a sign of the enduring stake the army holds inside the new government.

The military holds a quarter of all parliamentary seats, another gift of a constitution it scripted.

The Southeast Asian nation of 51 million people is in the throes of a dramatic transformation as it emerges from domination by paranoid and repressive generals who cut the country off from the outside world.

As a result expectations for an NLD-dominated government run high, but Myanmar's new rulers face a steep task.

Civil wars continue to rage in ethnic minority borderlands, poverty is widespread and the military continues to hold huge political and economic powers.

"The country is ready and hungry for change," political analyst Khin Zaw Win told AFP, adding the NLD will be under pressure to quickly build on the reforms of the outgoing quasi-civilian government.

Investors and tourists have begun to pile in as many of the junta's worst repressions have eased promising a better future to a public who now have access to mobile phones, cheaper cars and other coveted consumer goods.

A key challenge for Suu Kyi's administration will be maintaining smooth relations with a military that locked her and many of her colleagues up for years.

In addition to ring fencing 25 % of parliamentary seats to unelected soldiers the charter gives the army chief control over the home affairs, border and defence ministries -- and with it sweeping powers over the civil service.

The NLD has also hit stumbling blocks even before taking office.

There are concerns over the cabinet line- up in which Suu Kyi is the only woman and the majority of members are in their 60s or older, despite representing one the region's youngest populations.

It is also unclear how Suu Kyi will balance her workload as head of four key ministries -- the president's office, energy, education and foreign affairs.

After years of repression and in opposition to a army-led parliament NLD lawmakers also have little practical experience of government, but their in-trays will be full from day one in office.