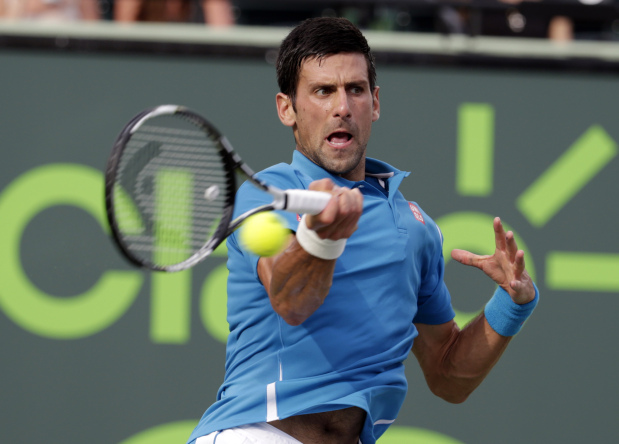 Novak Djokovic rolled his eyes after a backhand found the net, shrugged after an early barrage of errors and even heard the crowd at times pulling for his opponent.

None of it wound up mattering. Even when not at his sharpest, Djokovic is nearly impossible to beat.

Looking for his fifth title on Key Biscayne in six years, the world's top player reached the quarterfinals Tuesday with a 6-3, 6-4 win over 14th-seeded Dominic Thiem of Austria.

Djokovic will meet seventh-seeded Tomas Berdych — who grinded out a three-set win over 10th-seeded Richard Gasquet of France — in the Miami Open semifinals.

"It was far from easy," said Djokovic, who survived nine double-faults. "I struggled a lot."

Djokovic moved to 25-1 on the year, 27-1 in his past 28 matches on Key Biscayne. The Serbian star also moved a step closer to becoming the tournament's first back-to-back-to-back winner since Andre Agassi in 2001, 2002 and 2003. He fended off 14 of the 15 break points he faced and hasn't dropped a set so far in the tournament.

"That's a positive, in a way," Djokovic said of his success on break points. "I try not to get myself in those positions too much."

Thiem was no pushover, and seemed the farthest thing from intimidated.

He cranked his serve up to 141 mph, recorded 11 of the match's first 16 winners and twice got games on Djokovic's serve to last 10 minutes before the world No. 1 would ultimately prevail.

Perhaps it shouldn't have been surprising, since he and Djokovic came into the day leading the tour with 24 wins apiece this year.

"With one of 15 break points, you cannot beat anyone, probably," Thiem said. "For sure, not Djokovic."

Thiem nearly broke Djokovic to get to 5-4 in the first, before a review showed that the backhand that looked like a winner actually sailed a tad long. Djokovic hopped from his seat — he was already in changeover mode — and took advantage, winning to finish off the opening set. He double-faulted to give Thiem a break and knot the second set at 3-3, but broke right back and eventually closed out the win.

"He's still very young," Djokovic said of Thiem, 22, the youngest player ranked in the top 20. "He's been playing some of his best tennis the last couple of months. We'll definitely see a lot of him in the future."

Berdych needed nearly 2 1/2 hours to win 6-4, 3-6, 7-5, with the temperature reaching the mid-80s and the humidity making it seem much warmer on the court. A slew of upsets knocked out most of the tournament's top seeds, although Berdych hasn't seen his side of the draw open up much with all that star power going home early.

And now Djokovic awaits him.

"I'm just going to try and focus on my game, try to play some good tennis, stick with the things that are working well so far for me and just try to go for it no matter who's going to be the opponent," Berdych said.

Gilles Simon is also headed to the men's quarterfinals, rolling past fellow Frenchman Lucas Pouille 6-0, 6-1. No. 6 seed Kei Nishikori of Japan, No. 12 seed Milos Raonic of Canada, No. 15 David Goffin of Belgium, No. 16 Gael Monfils of France and No. 24 Nick Kyrgios of Australia also advanced to the quarters. Monfils needed three sets; Nishikori, Raonic, Goffin and Kyrgios moved on with straight-set victories.

Switzerland's Timea Bacsinszky, who has been the comeback queen on Key Biscayne, reached the women's semifinals after another three-set marathon. The 19th-seeded Bacsinszky rallied to top fifth-seeded Simona Halep of Romania 4-6, 6-3, 6-2 in the quarterfinals.

A Russian player will oppose her in the semis, either 15th-seeded Svetlana Kuznetsova or 30th-seeded Ekaterina Makarova.

It was the second straight win against a top-five seed for Bacsinszky, both coming after she dropped the opening set and exceeding the two-hour mark. She ousted third-seeded Agnieszka Radwanska in the round of 16, and needed 2:28 to beat Halep.

With Halep out, the only top-10 seed left in the women's draw is No. 2 Angelique Kerber of Germany. She plays Madison Keys of the U.S. in the quarterfinals Wednesday.