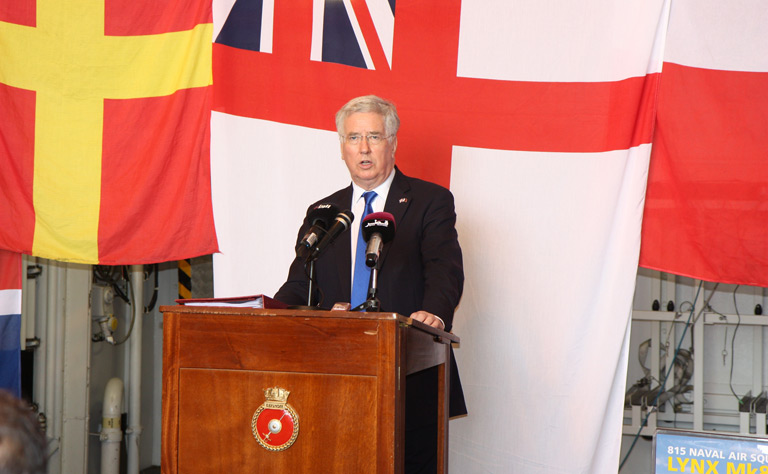 Doha: British Defence Secretary Michael Fallon said that the State of Qatar is an important regional strategic partner for Britain in all fields, especially in terms of military and defense relations, expressing his happiness to visit Qatar and attend the Fifth Doha International Maritime Defence Exhibition and Conference (DIMDEX 2016).

Speaking at a press conference here today Fallon said that last week witnessed the signing of a new Defence Cooperation Arrangement between the State of Qatar and the United Kingdom in London.

The Agreement will enable closer coordination on training and exercises until 2026.

Responding to Qatar News Agency's (QNA) question about the United Kingdom's policy toward Iran and the security of the Gulf region, Mr. Fallon said, "that his country did not change its policy towards Iran, but it encourages the implementation of the nuclear deal, in the hope that Iran would change its policy and play a constructive role towards the countries of the region", stressing that "the security of the Gulf region is our security, too."

On the situation in Libya, Fallon noted that a political solution is inevitable in the end, even if under the security solution is currently prevailing, stressing the need for a strong central government to work with in order to settle situation.

The Defence Secretary also underlined the importance of the global coalition making progress against Daesh including restricting its ability to conduct attacks in Europe.

Fallon confirmed that his visit to Doha today expresses the extent of the United Kingdom's commitment to working with Qatar and its other allies to enhance security and stability which we need to maintain the security of the gulf region and Europe.

The British minister described relations between the two countries as strong and growing in the field of security and defence saying such relations include defence exports and coordination on the organizing of the 2022 World Cup in Qatar.

On the Syrian crisis, Fallon called for the encouragement of reaching a new peaceful settlement in Syria in which there should be no place for Assad.

He said we should all work for bringing an end to the civil war in Syria which caused death to thousands of people and made others homeless, and to pave the way for elections and the formation of a new national government that brings together all parties, calling in the meantime for continuation and intensification of presser on ISIS.

Referring to attacks on the Belgian capital Brussels last week, the British Defence Secretary said the attacks warned us all of the need to cooperate to defeat violence and the barbaric ideology adopted by ISIS, stressing the need to press ahead in the formation of an international alliance against terrorism.

Fallon noted the British navy will lead from next month until October the CTF-150 which includes 31 countries to make a deterrent force against piracy, smuggling and terrorism, explaining that this force also supports international efforts against ISIS and the halt of weapon supplies and personnel to and from areas under its control.

He added that the United Kingdom have one of the most powerful naval forces in the world, saying there are British naval pieces that constantly patrol the Indian Ocean and the Gulf of Aden to secure maritime trade routes and maintain trade interests and oil and gas supplies to British ports.