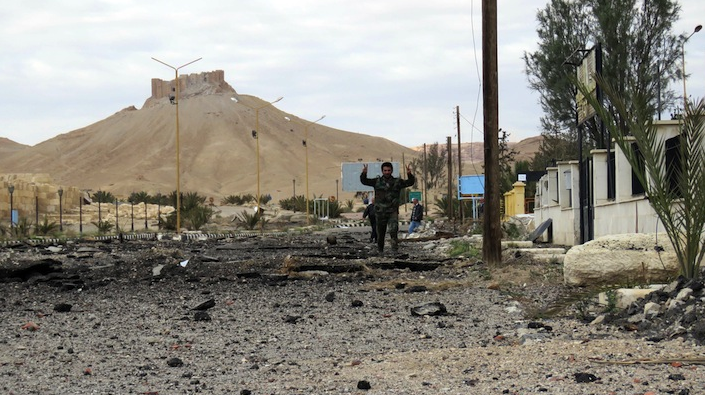 A road heavily damaged by shelling is seen in Palmyra. (AFP Photo)

The strikes focused on areas around the Syrian towns of Palmyra and Al Qaryatayn, killing 60 militant fighters and destroying artillery positions, RIA reported.

President Bashar Al-Assad said it would not be difficult to agree on a new Syrian government including opposition figures, but his opponents responded that no administration would be legitimate while he remained in office.

Assad, bolstered by military victory in Palmyra, was quoted by RIA as saying a new draft constitution could be ready in weeks and a government that included opposition, independents and loyalists could be agreed.

While the distribution of portfolios and other technical issues would need to be discussed at Geneva peace talks, which resume next month, "these are not difficult questions", Assad said.

Opposition negotiators immediately dismissed Assad's remarks, saying that a political settlement could be reached only by establishing a transitional body with full powers, not another government under Assad.

"What Bashar Al Assad is talking about has no relation to the political process," said George Sabra of the High Negotiations Committee.

The US also rejected Assad's comments. "I don't know whether he envisioned himself being a part of that national unity government. Obviously that would be a nonstarter for us," White House spokesman Josh Earnest said.