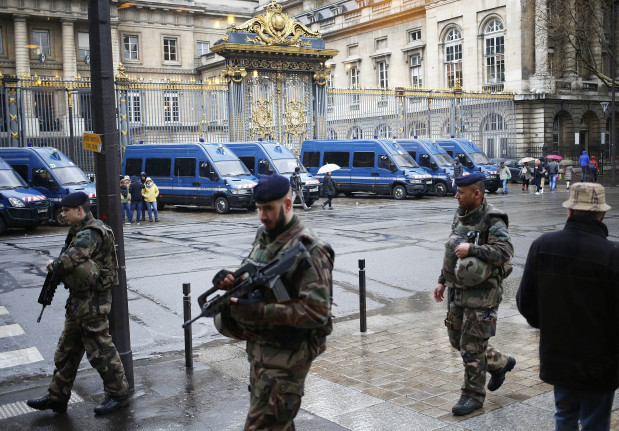 French soldiers patrol outside the Paris hall of Justice, Wednesday, March 30, 2016 while Frenchman Reda Kriket is being questioned by a magistrate who is expected to file preliminary terrorism charges. (AP Photo)

Paris: France on Wednesday charged the main suspect in a foiled attack plot with membership of a terrorist organisation after police found an arsenal of weapons and explosives at his home.

French national Reda Kriket, 34, was arrested near Paris last week and a police raid on his apartment netted a cache of assault rifles, handguns and TATP, the highly volatile homemade explosive favoured by Islamic State (IS) jihadists.

State prosecutor Francois Molins said Wednesday that "no specific target" had been identified for the foiled attack, but the cache of weapons showed an imminent act of "extreme violence" had likely been prevented.

Investigators have been stepping up efforts to smash a tangled web of IS-linked extremists bamed for both the November Paris attacks and last week's suicide bombings on Brussels airport and metro that killed 32 people.

Another French suspect, 32-year-old Anis Bahri, was arrested in Rotterdam in the Netherlands on Sunday in connection with the foiled Paris plot and is fighting extradition to France.

Both Kriket and Bahri are believed to have travelled to Syria in late 2014 or early 2015, and since then between France, Belgium and the Netherlands, the French prosecutor said.

Two other suspects -- Abderrahmane Ameroud, 38, and Rabah M., 34 -- have been charged in Belgium over the foiled plot and will be held for another week, the country's federal prosecutor said.

The arrests highlight the extensive links investigators have uncovered between French and Belgian IS cells behind the Brussels and Paris attacks.

Kriket, who is linked to the suspected ringleader of the Paris attacks, was found guilty in absentia in Brussels in July of being part of a jihadist recruitment network and sentenced to 10 years in jail.

Investigations showed Kriket played a key role in financing the recruitment network with money from robberies and stolen goods.

Brussels airport said it would remain closed to passenger flights until at least late on Thursday afternoon as the operator carries out further tests.

"The evaluation of the trial is still ongoing and will take at least till tomorrow afternoon. No flights till then," the airport operator said Wednesday on Twitter.

The airport has been shut since suicide bombers Najim Laachraoui and Ibrahim El Bakraoui blew themselves up in the departure hall on March 22.

The metro, which was due to be fully operational on Wednesday, is still running on a limited service after the national security council judged the decision to reopen premature.

The mayor of the Brussels district of Molenbeek, Francoise Schepmans, meanwhile, said far-right extremists had been banned from holding a planned anti-Islam rally in the neighbourhood after talks with police.

Criticism of the Belgian authorities' handling of the attacks probe has mounted after the sole suspect charged over the attacks was freed on Monday for lack of evidence.

Prosecutors had charged the suspect, named by media as Faycal Cheffou, with "terrorist murder" and were investigating whether he was the third airport attacker who fled after his bomb did not detonate.

But the hunt is now back on for the so-called "man in the hat", seen in CCTV footage next to the two suicide bombers at the airport.

Investigators are looking for Naim Al Hamed, whose fingerprints were found at the apartment used by the Brussels airport bombers, but they do not know whether he is the "third man" in the attack or another fugitive.

Al Hamed has been linked to Salah Abdeslam, the key suspect in the Paris attacks, who was arrested in Brussels on March 18 after more than four months on the run.

A closed-door hearing on Thursday will decide whether Abdeslam should be extradited to France.

Belgium has also been accused of missing a series of leads linking the Paris attacks to those behind the Brussels bombings.

In the most damning revelation, Turkey said Belgium ignored warnings from Ankara after it deported airport suicide bomber Bakraoui as a "terrorist fighter" last year following his arrest near the Syrian border.