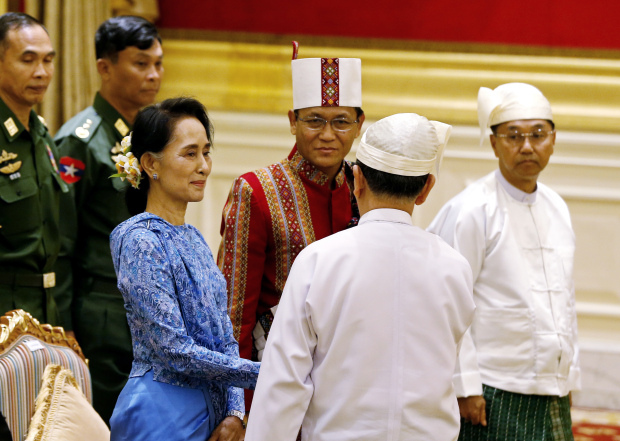 Naypyidaw, Myanmar: Aung San Suu Kyi's party will on Thursday submit a proposal to create a new "state advisor" role for her, MPs said, giving her power to liaise between the president and parliament.

The Southeast Asian nation is witnessing the dawn of a new era following nearly half a century of military repression, with surging hopes that Suu Kyi's newly sworn-in administration can accelerate the country's economic and political rejuvenation.

But Suu Kyi cannot become president because of rules in a junta-era constitution, despite the huge election victory she delivered for her National League for Democracy in November's historic elections.

A draft of the proposal, which mentions Suu Kyi by name, would give her "responsibility to the parliament regarding the performance of advice", power to conduct any meetings deemed necessary and a budget.

The post, which could mirror the role of a prime minister in other political systems, would last for the same five-year term as the president and give Suu Kyi access to the legislature, after she was forced to relinquish her parliamentary seat to join the cabinet.

It will be submitted to the upper house of parliament on Thursday, according to several MPs, including Pu Gin Kam Lian from the Zomi Congress for Democracy Party, from western Chin state.

"It will be discussed and approved coming days," he told AFP.

The Nobel laureate has pledged to rule above President Htin Kyaw, a close confidante who was sworn in on Wednesday, and she has also taken on four cabinet posts in the foreign affairs, education, energy and president's office ministries.

Suu Kyi, the daughter of the country's independence hero, won a seat in 2012 by-elections and embraced the country's fledgling quasi-civilian parliament as it developed into a vibrant power centre in recent years.

Last November's polls, the freest in decades, saw her party rake in 80 per cent of available parliament seats, giving them a massive public mandate.

The new lawmakers hail from a variety of backgrounds, from doctors to poets, but many have little experience of government and look to Suu Kyi for guidance.

They are tasked with reviving a battered economy and a society straitjacketed by the army, which ruled with an iron fist between 1962 and the start of reforms in 2011 under the administration of retired general Thein Sein, who stepped aside on Wednesday.

The army is also still firmly on the political scene. The military holds a quarter of all parliamentary seats and three key posts in the cabinet.