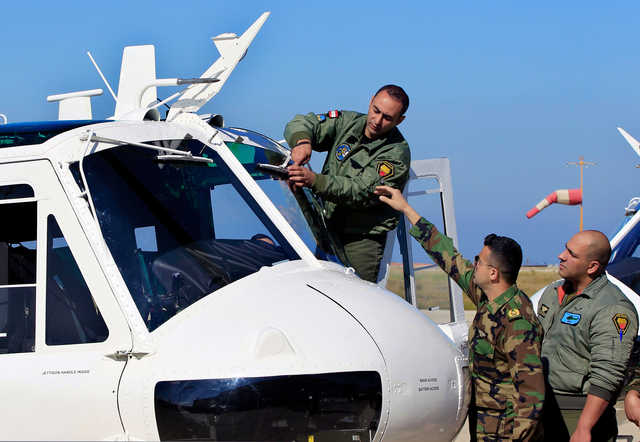 Britain will provide nearly $30 million to the Lebanese army, mostly to boost security along the country's volatile border with Syria, the UK's top diplomat said on Thursday.

In his first visit to Beirut as foreign secretary, Philip Hammond announced Britain would provide Lebanon with an additional £4.5m ($6.5m) to help train more than 5,000 soldiers.

Another £15.3m would be allocated "for the training and mentoring of the Lebanese Armed Forces' Land Border Regiments, over the next three years," according to a statement from the embassy.

Hammond said the "aim is for Lebanon to have secured 100 per cent of its border with Syria, and for the UK to have trained over 11,000 Lebanese soldiers in the specialist techniques of urban counterterrorism by 2019".

"Lebanon is an important part of the front line against terrorism," he said after meeting Lebanese Prime Minister Tammam Salam.

Since Syria's conflict erupted in 2011, Lebanon's army has fought off armed groups and jihadist factions along the country's eastern border.

In August 2014, the army clashed with the Islamic State group and Al Nusra Front, Al Qaeda's affiliate in Syria, in the border town of Arsal.

As they withdrew, IS and Al Nusra kidnapped 30 Lebanese soldiers and policemen, 16 of whom were released after nearly 18 months of negotiations.

The Lebanese army and Internal Security Forces receive significant military support from outside countries including the US and France.

Since 2011, Britain has spent more than $59m on supporting Lebanon's security forces, according to the Foreign Office.

Riyadh said it would keep the weapons, which had been provided by France.