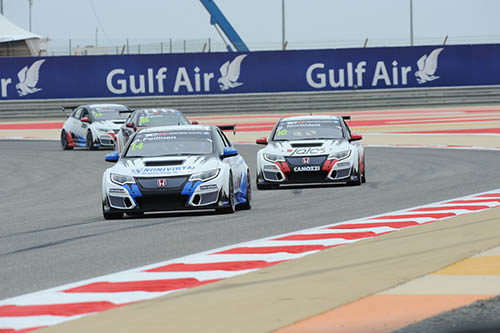 The races are held in support of the 2016 Formula One Gulf Air Bahrain Grand Prix.

The Porsche GT3 Cup is holding a pair of non-championship races this weekend, having only recently completed a thrilling 2016 season while TCR is holding the first round of its 2016 campaign in Sakhir.

Olson was a mere 0.138 seconds quicker than 2016 champion Jeffrey Schmidt, while Zaid Ashkanani followed in third 0.234s behind.

Bahrain had three drivers competing in the BIC-bred, one-make series that features 13 competitors this weekend.

They were classified eighth through 10th. Shaikh Isa bin Abdulla Al Khalifa led the national heroes with a best lap of 2:08.585.

Porsche GT3 Cup action continues today with Qualifying at12noon and then the first 10-lap race of the weekend at 4.25pm.

In the TCR International Series, Pepe Oriola set the pace with a fastest lap of 2:13.069 in the opening practice session.

The former World Touring Car Championship driver was 0.413 seconds in front of Gianni Morbidelli, and 0.755s in front of Aku Pellinen.

Shaikh Salman was classified 17th out of the 19 participants with a best lap of 2:19.834. Karimi followed one position behind 11.269 seconds off the pace.

In practice two, it was Morbidelli’s turn to shine. The ex-Formula 1 driver set the pace with a best lap of 2:13.347.

Oriola followed just 0.424s back, while Jean-Karl Vernay was third fastest 0.437s back.

Racing in the TCR resumes today with qualifying at 1pm, setting the grid for the season’s opening race at 7.30pm.