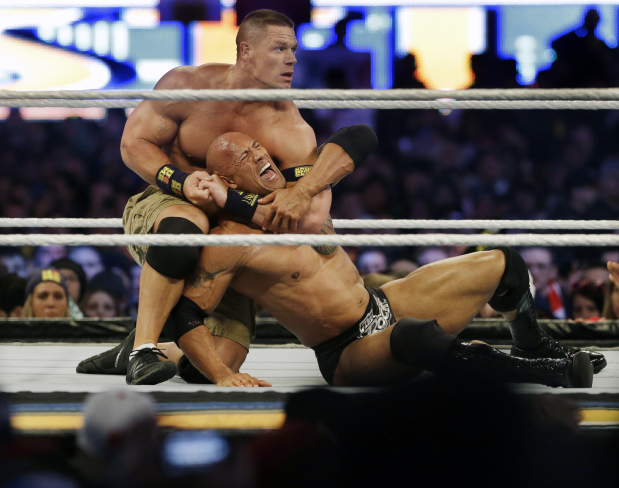 WrestleMania is always the biggest, baddest fight night of the year — and on Sunday, maybe of all time.

Forget the Final Four. The true extravaganza this weekend in Texas is WrestleMania.

WWE is headed to a stadium worthy of a Super Bowl, and has lofty expectations of stuffing 100,000 fans inside AT&T Stadium in Arlington, Texas.

The roughly five-hour card is highlighted by three matches worthy of the main event.

"I love being in the ring, I always have," Lesnar said. "I believe somewhere deep down when God created me that I was to be a performer in some way, shape or form, whether it was in the octagon, the wrestling mat or the squared circle."

WWE has high hopes that not only will WrestleMania 32 top the 93,173 fans at WrestleMania III in 1987 and set the company's attendance mark, but that it can showcase the grandest card of all time.

Superstars John Cena, Seth Rollins and Randy Orton will all miss the show. Daniel Bryan, who won the WWE championship two years ago at WrestleMania, retired this year because of lingering effects of concussions. Sting, in one of the main bouts last year, is the headliner at the WWE Hall of Fame induction ceremony on Saturday night. Even undercard wrestlers like Luke Harper, Neville, Nikki Bella and Tyson Kidd are out with injuries.

It's akin to the Golden State Warriors losing Steph Curry, Draymond Green and Klay Thompson right before the playoffs.

But the show goes on.

Not unlike at the college basketball Final Four in Houston, there are benchwarmers (The Social Outcasts), bricks (a potential street fight weapon), flops (paging Ric Flair), jumpers (Kalisto's ring entrance), even big 3s (The New Day).

Every good game needs The Rock.

Dwayne Johnson takes a break from filming his latest blockbuster to return to an unspecified role at WrestleMania. He had UFC star Ronda Rousey by his side last year in a verbal smackdown with Triple H and Stephanie McMahon that had fans clamouring for some sort of match at this year's WrestleMania.

Perhaps on Sunday, Johnson will return to aid his real-life cousin Reigns and layeth the smackethdown on some bad guys.

"Been working on a surprise or two for months now for the most important part of the show — the fans," Johnson wrote on an Instagram post.

But each saucy storyline needs a twist, and maybe Reigns ending the show with his finishing spear on Johnson and holding the title belt high over his head as 100,000 fans boo him could become his one shining moment. It's fantasy booking for sure, so don't bet on that finish.

The actual matches, though, are fair game.

An online gambling company based in Canada, Bovada, lists Reigns at minus-700 to top Triple H and has Kevin Owens and The New Day among the other favourites on the card. Such odds aren't offered in Las Vegas, which prohibits betting on contests where the outcome is known in advance.

For fans watching on TV, WWE makes the show available on its own network for $9.99 a month — and for $59.95 on pay-per-view — and new subscribers will get WrestleMania for free as part of a monthlong trial at WWENetwork.com. The Hall of Fame ceremony and a WrestleMania kickoff show on Sunday includes the Andre the Giant Memorial Battle Royal as part of the weekend's programming.

One of the company's top box-office attractions, Lesnar only wrestles on WWE Network events. Working on a part-time basis, Lesnar upped his schedule over the past year and has wrestled on the occasional live show.

"Vince got his checkbook out and he's writing more checks," Lesnar said. "But I have a limit and we're at that limit right now."

Lesnar has wrestled in some of Mania's more memorable moments — such as landing on his head during a failed flip off the top rope against Kurt Angle, getting booed out of Madison Square Garden in his final WWE match before a lengthy hiatus. He was WWE champion last year and lost the belt in a convoluted finish where he wasn't even pinned.

"This is a job and I'm not caught up into it like maybe I'm supposed to be," he said. "I approach this as, I'm a skilled worker. I clock in, I clock out. People pay to watch me and, by chance, I guess they find me entertaining. ... When I look back and what I'm proud of is the money in my bank account."

Forbes released this week its list of highest-paid wrestlers and Lesnar was No. 2 with an estimated $6 million in earnings last year. Cena topped the list at $9.5 million.

"There could be five people in the stands or 100,000 people, I don't treat it any differently," Lesnar said. "I approach the competition the same. That's just my mentality. I don't get caught up in the business. I show up, I do my job, I collect my check and I go home."