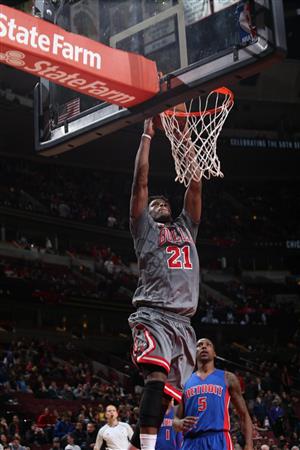 Jimmy Butler #21 of the Chicago Bulls goes to the basket against the Detroit Pistons on April 2, 2016 at the United Center in Chicago, Illinois. (Yahoo Photo)

Portland continued its drive for the fifth playoff spot in the Western Conference and had no regard for Miami, racing to a 17-point win on Saturday.

Portland began pulling away in the second quarter and led by as many as 28 points in the third to gain its fourth win in a row and seventh straight victory at home.

Kawhi Leonard scored a career-high 33 points, eight of which came in final minute, as San Antonio thwarted a determined upset bid by the Toronto Raptors in a 102-95 win that allowed the Spurs to remain unbeaten at home.

With San Antonio clinging to an 88-84 lead, Leonard took charge of the game at the end, hitting two contested jumpers and then sinking four straight free throws to secure the victory.

With the victory, San Antonio (64-13) established a franchise record for wins in a season that was set in 2005-06 when the Spurs went 63-19. The Spurs have now defeated every team in the NBA this season.

The Spurs are 39-0 at the AT&T Centre this season and have supplanted the 1995-96 Chicago Bulls for the longest home winning streak to start a season in NBA history.

C.J. Miles scored 25 points off the bench, including the go-ahead 3-pointer with 3:39 left, as Indiana rallied to beat short-handed Philadelphia.

Isaiah Canaan had 24 for Philadelphia (9-68), which needs one victory in its remaining five games to avoid matching the 1972-73 Sixers for the worst full-season record in NBA history.

Reggie Jackson had 22 points and Tobias Harris had 21 to lead Detroit, which got double-figures scoring from all five starters.

Harris' put-back with 49.5 seconds left in the fourth quarter put the Pistons up 88-83. Jackson hit two clutch free-throws with 20.4 seconds left to help Detroit secure its third win in four games against Chicago this season.

Jimmy Butler led all scorers with 28 points and recorded the first triple-double of his career with career-highs in rebounds (17) and assists (12).

Chicago, which played without starters Derrick Rose and Taj Gibson, trails Indiana by two games and the Pistons by 2 1/2 games.

Rudy Gay scored 25 points and grabbed nine rebounds, Ben McLemore had eight of his 14 in a decisive run in the fourth quarter, and shorthanded Sacramento beat Denver.

Seth Curry scored 17 off the bench and Darren Collison and Willie Cauley-Stein had 14 each for the Kings.

The Kings played without DeMarcus Cousins and Rajon Rondo, who stayed in Sacramento. Denver was glad Cousins did not travel after he averaged 38 points, 14.5 rebounds and three blocks in the first two games between the teams.