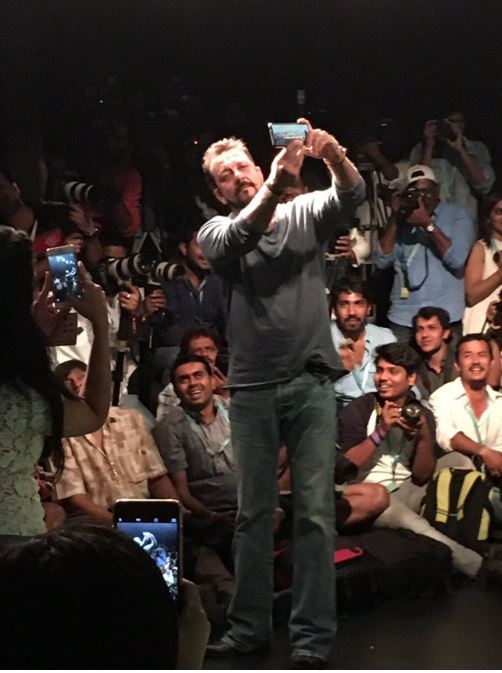 Sanjay Dutt attended his first ever fashion show post his release from Yerwada jail, at the ongoing Lakme Fashion Week and the actor wasn't less than a delight for the photographers as he not only posed for pictures, but also took a selfie with them.

Wearing casual blue shirt and denim, Dutt was in great spirits and posed with his wife, who was dressed in royal blue saree. When photographers requested him for a solo picture, Dutt stood tall in middle of the runway.

Amid photographers calling him by his nickname 'Baba', one of them asked him for a selfie and without refusing even once he took the phone from the cameraperson and clicked few happy selfies with the whole bunch.

Not only this, he sat down with them on floor but got clicked once again.

The actor was convicted in the 1993 Mumbai serial blasts case, served a 42-month sentence at Pune jail. He was released on February 25, 103 days ahead of his prison term.

Dutt surely became the pre-show showstopper for Masaba, who was showcasing her collection, inspired by the iconic works of Matthieu Venot (an ace French photographer) & Katrin Bremermann (a celebrated German artist).

Actress Shraddha Kapoor was the main showstopper for the designer's collection which she presented in collaboration with fitbit.