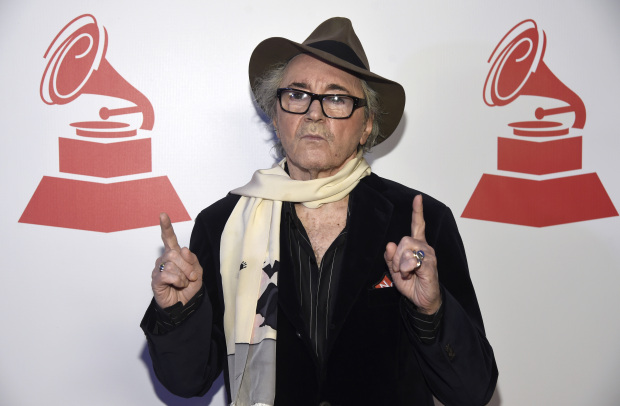 In this Wednesday, Nov. 18, 2015 file photo, Gato Barbieri arrives at the Lifetime Achievement and Trustees Awards presentation at the Ka Theater in the MGM Grand Hotel, in Las Vegas. (AP Photo)

Latin Jazz saxophonist Leandro "Gato" Barbieri, who composed the Grammy-winning music for the steamy Marlon Brando film "Last Tango in Paris" and recorded dozens of albums over a career spanning more than seven decades, has died at age 83.

Laura Barbieri, his wife of nearly 20 years, said her husband died Saturday in a New York hospital from pneumonia. The musician recently had bypass surgery to remove a blood clot.

"Music was a mystery to Gato, and each time he played was a new experience for him, and he wanted it to be that way for his audience," she said. "He was honoured for all the years he had a chance to bring his music all around the world."

The Argentine-born musician recorded some 35 albums between 1967 and 1982, when he stopped consistently making new records. He toured regularly and went on to record four more albums, including 1997's smooth jazz "Que Pasa," which reached No. 2 on Billboard's contemporary jazz charts.

Though in poor health, Barbieri, still sporting his trademark black fedora hat, had been performing monthly at the Blue Note jazz club in New York, since 2013. He last performed at the club on Nov. 23.

"He was my best friend," Laura Barbieri said Saturday. "I'm so grateful we had these 20 years together." She said a public memorial was being planned, but details have not been finalised.

When director Bernardo Bertolucci needed sexy music for "Last Tango," he turned to Barbieri who was known for his distinctive, sensuous, huge-toned tenor sax sound.

"It was like a marriage between the film and the music," said Barbieri of the soundtrack that made him an international star, in a 1997 interview with The Associated Press. "Bernardo told me, 'I don't want the music to be too much Hollywood or too much European, which is more intellectual. I want a median.'"

Barbieri said tango had a special appeal because it is deeply tied to his Argentine soul.

"Always in the tango is tragedy — she leaves him, she kills him. It's like an opera but it's called tango," Barbieri said in 1997, noting that half of Argentinians, including him, had roots in Italy. "The lyrics and the melodies are very beautiful. It's very sensual."

Born on Nov. 28, 1932, in Rosario, Argentina, Barbieri grew up in a family that included several musicians, but did not take up an instrument until he was 12 when he heard bebop pioneer Charlie Parker's recording of "Now's the Time" and began studying clarinet.

After moving to Buenos Aires in 1947, Barbieri picked up the alto saxophone. He earned the nickname "El Gato," which means "The Cat," in the 1950s because of the way he scampered between clubs with his saxophone.

He gained national prominence playing alto saxophone in an orchestra led by Lalo Schifrin, the pianist and composer who later made a big impact with his TV and film scores, including "Theme from Mission: Impossible."

Later in the 1950s, Barbieri switched to tenor saxophone as he began leading his own groups.

In the 1960s, splitting his time between Rome and New York, Barbieri became part of the Ornette Coleman-inspired free jazz revolution, working extensively with trumpeter Don Cherry from Coleman's groundbreaking quartet. Influenced by other modern jazz saxophonists — including John Coltrane, Albert Ayler and Pharoah Sanders — he developed a warmer, grittier sound on the tenor sax. He recorded and performed with such avant-garde jazz musicians as Cherry, Carla Bley and Mike Mantler.

But he soon rediscovered his roots, incorporating South American rhythms, harmonies and melodic themes on albums starting with "The Third World" in 1969 — and eventually developed his own contemporary jazz sound. He followed that with the live album "El Pampero" in 1971.

After releasing the "Last Tango" album in 1972, Barbieri recorded a series of mellower Latin-infused soul-jazz and jazz-pop albums, including four "Chapter" albums for the Impulse! label, which explored Brazilian, Afro-Cuban and Argentine rhythms. He then released "Caliente" (1976) for the A&M label, which included his popular rendition of Carlos Santana's "Europa."

Barbieri recorded new material consistently until 1982, when a dispute with his record label led him to focus solely on touring. He recoded only intermittently in the 1980s, and did not release any albums from 1988-97. He released "Que Pasa" in 1997 after dealing with the turmoil of losing his Italian-born wife of 35 years to a degenerative illness in January 1995, and then undergoing triple bypass heart surgery two months later.

He had to recover physically and overcome depression at the death of his wife to finish the album, which he credited with being a healing force.

"The only way I saw was to go out and do something every day," he said. "The music gave me life."

Barbieri would release only three more albums over the rest of his life — including "The Shadow of the Cat" in 2002, a Latin-flavoured smooth jazz session featuring guest trumpeter Herb Alpert, and "New York Meeting" in 2010 on which he played straight-ahead jazz standards, such as Thelonious Monk's "Straight, No Chaser" and Miles Davis' "So What."

Barbieri married again in 1996 and had a son, Christian, who turns 18 on Sunday. Besides his wife and son, he is survived by his sister Raquel Barbieri, who lives in Buenos Aires.

In lieu of flowers, his family requests that donations be sent to The Reciprocity Foundation, a nonprofit that works to help homeless and foster youth in New York City.