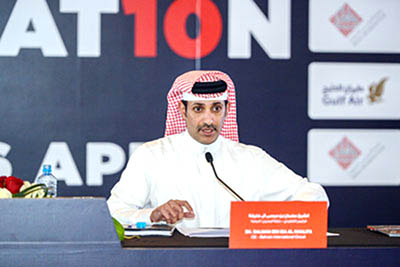 The new qualifying format sees drivers with the slowest time eliminated every 90 seconds.

The format received a lot of criticism from drivers and officials claiming it kills the fun and excitement of the race.

Shaikh Salman, however, believes it will be sorted out by FIA.

“I think that needs to be sorted out. The FIA have looked into it simply because the old one did have some issues,” he said.

However, he also believes the new format does prove exciting at some point.

“For drivers to come out early, I like that. I think it’s fun for the fans and us as promoters. Now I think the one minute and a half might need to be looked,” Shaikh Salman added.

He later pointed out his trust in the FIA to solve the issue.

“They will sort it out. They always do,”

Shaikh Salman said he was excited at start to the Bahrain Grand Prix.

“I didn’t see the full thing, I just saw the start and it started like an amazing race. Lewis Hamilton (Mercedes) got hit by Valtteri Bottas (Williams), that just mixed it up, Sebastian Vettel (Ferrari) didn’t even start the race, so there are so many stories that are going to come out from this race in Bahrain,” he concluded.