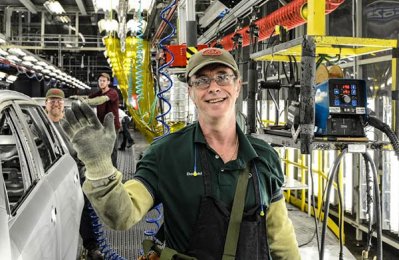 Kia Motors Manufacturing Georgia has produced the plant’s two millionth vehicle – a white 2016 Sorento SXL – which rolled off the assembly line in the US city of West Point, Georgia.

Representing an investment of more than $1.1 billion, KMMG began mass production on November 16, 2009 and today produces more than forty percent of all Kia vehicles sold in the US, a statement said.

“Assembling two million vehicles in less than seven years is a remarkable achievement, and one that each of our team members can take a lot of pride in,” said KMMG president and CEO Hyun-Jong Shin. “The world-class quality that goes into every Sorento CUV and Optima midsize sedan we build is a direct result of the hard work and commitment of our team members, and today we salute their commitment to excellence.”

Together with on-site and local suppliers, KMMG is responsible for the creation of more than 15,000 jobs in West Point and the surrounding region, and achieved its highest-ever ranking – top five among vehicle assembly plants in the US – in JD Power’s most recent Initial Quality Study.

“Together, Kia and Georgia have a strong reputation of success,” said Georgia Governor Nathan Deal. “The company’s continued investment in the state speaks volumes to our pro-business atmosphere, and we will continue to support them as they grow here. I want to congratulate Kia’s team members on this accomplishment.”-TradeArabia News Service