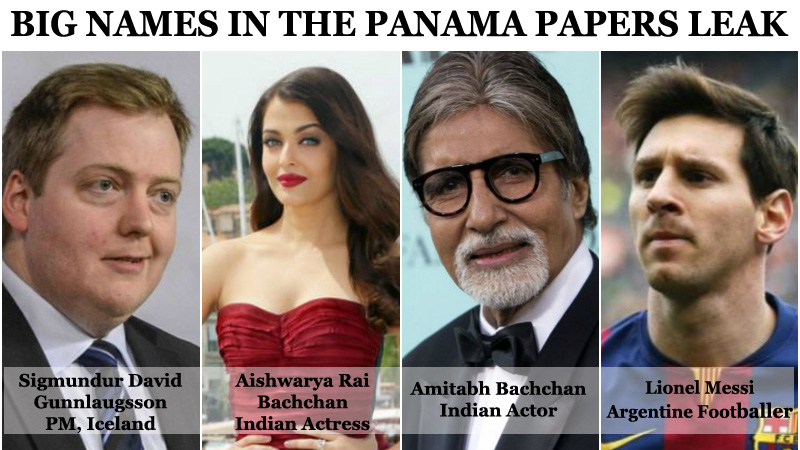 World leaders, stars of the pitch and screen and dozens of billionaires were among those named and shamed in what looks to be the biggest ever leak of inside information in history.

Covering 40 years of emails, financial records and passport details, an investigation by more than 100 media groups shows how some of the world's most powerful people have secreted away their money in offshore jurisdictions

Below are some of the main allegations made in Sunday's release based on documents from Panama-based law firm Mossack Fonseca:

- Banks, companies and aides close to Russian President Vladimir Putin secretly shuffled as much as $2 billion using offshore companies, gaining hidden influence in the country's media and automotive industries. The Kremlin has accused the ICIJ of launching a misleading "information attack".

- Bollywood's Amitabh Bachchan and martial arts movie star Jackie Chan are among celebrities who feature Monday in a massive leak of documents, some of which reveal hidden offshore assets.
Bollywood legend Bachchan, simply known as the "Big B" in India, was appointed director of at least four shipping companies registered in offshore tax havens and set up 23 years ago.
The authorised capital of these companies ranged from just $5,000 to $50,000 but they traded in ships worth millions of dollars, according to the Indian Express newspaper.
His daughter-in-law, actress Aishwarya Rai Bachchan, was also director and shareholder of an offshore company, along with members of her family, before it was thought to have been wound up in 2008, according to the newspaper. The media adviser of the former Miss World winner has rejected the documents as "totally untrue and false".

- Iceland's Prime Minister Sigmundur David Gunnlaugsson and his wife used an offshore company, Wintris Inc., to hide millions of dollars of investments in three major banks during the financial crisis. He has denied any wrongdoing but faces a vote of no confidence this week.

- Two leaders who have staked their reputations on pushing for transparency - Chinese President Xi Jinping and British Prime Minister David Cameron - have at some point had family links to offshore companies.

- Mossack Fonseca worked with at least 33 people and companies blacklisted by Washington because of business links to Mexican drug lords, terrorist organisations or rogue nations, including North Korea. One supplied fuel for planes the US alleges Syria's regime used to bomb its own citizens.

- The firm's customers include Ponzi schemers, drug kingpins, tax evaders and a US businessman convicted of travelling to Russia to have sex with underage orphans, who signed papers for an offshore company while in jail.

- Suspended UEFA chief Michel Platini, who is serving a six-year ban from football for over a $2 million payment from FIFA president Sepp Blatter, turned to Mossack Fonseca to help him administer an offshore company created in Panama in 2007.

- More than 500 banks, their subsidiaries and branches have worked with Mossack Fonseca since the 1970s to help clients manage offshore companies. UBS set up more than 1,100 and HSBC and its affiliates created more than 2,300.