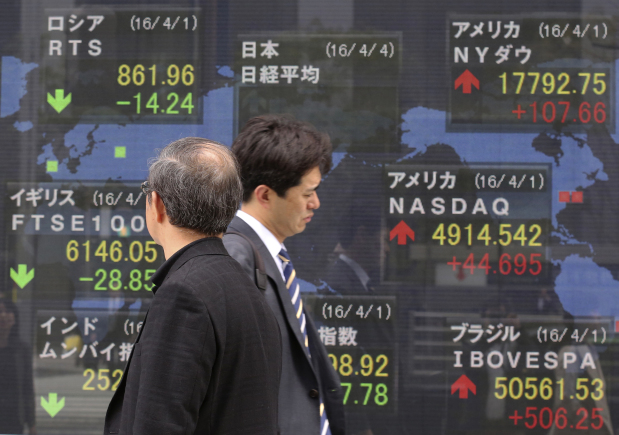 People walk by an electronic stock board of a securities firm in Tokyo. (AP Photo)

Tokyo: Tokyo stocks dropped more than two percent on Tuesday morning as exporters were hit by a strengthening yen and energy firms sank with oil prices.

Despite better-than-expected readings on US jobs and factory activity Friday, there is little expectation the Federal Reserve will lift interest rates before June, putting strong downward pressure on the dollar.

On Tuesday the greenback headed towards its lowest level against the Japanese currency in around 18 months, buying 110.84 yen.

"The risk of a strong yen is still there and coupled with overseas factors like falling oil, it's quite hard to become positive," said Norihiro Fujito, a strategist at Mitsubishi UFJ Morgan Stanley Securities.

"We're likely to keep trading at these depressed levels."

Oil-linked firms have plunged across the planet as crude prices, which broke above $40 last month, are hit by fears over the outcome of talks this month on freezing output and addressing a supply glut.

Among other firms troubled autoparts maker Takata fell 5.29 percent to 376 yen. The firm has been under renewed pressure after Bloomberg News reported last week that its airbag recall costs could be as high as $24 billion.

Takata is struggling to deal with an inflator defect that can cause airbags to deploy with explosive force and fire metal shrapnel at drivers or passengers, a fault linked to at least 10 deaths globally and scores of injuries.

On Wall Street, the Dow and the S&P 500 closed 0.3 percent lower on Monday, while the tech-rich Nasdaq declined 0.5 percent.