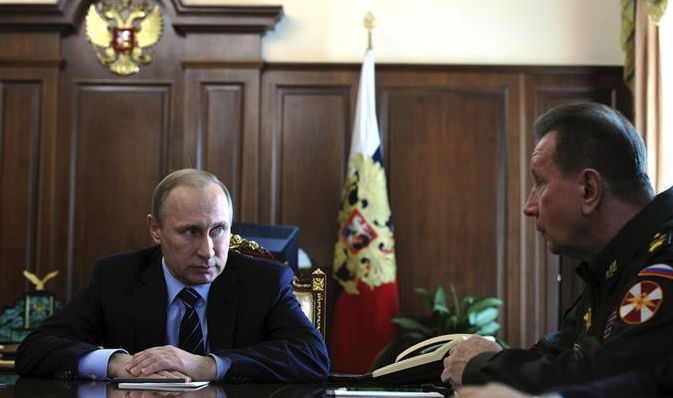 Putin, left, and Zolotov attend a meeting, dedicated to the creation of a national guard at the Kremlin in Moscow. (Reuters Photo)

Moscow: Russian President Vladimir Putin has announced the creation of powerful new National Guard security force, a move analysts said could be aimed at warding off unrest over the country's economic crisis.

Putin said in a televised meeting with Interior Minister Vladimir Kolokoltsev and other security officials that the force would merge the country's interior ministry troops with riot police and swat teams.

The Kremlin said that the National Guard will answer directly to Putin and tackle terrorism and organised crime, but did not specify how many troops would be included in the new structure.

The force will be led by interior ministry troop boss Viktor Zolotov, who previously headed Putin's own security detachment.

Analysts say the move comes as the Kremlin strives to bolster its security apparatus ahead of parliamentary elections in September in the face of a crippling economic crisis authorities fear could stir unrest.

"The economic crisis is continuing and could give rise to a social crisis," said Konstantin Kalachev, head of the Moscow-based Political Expert Group think tank.

"This means that security forces need to be reinforced and prepare for the worse."

Regional security expert Mark Galeotti called the restructuring "a big deal" and asked "what does it say when you need your own personal army?".

"There is no real reason for creating the (National Guard) out of the Interior Troops and other forces unless you have a serious worry about public unrest," Galeotti, a professor at New York University, wrote in a blog posting.

Kremlin spokesman Dmitry Peskov denied that the new force was being created with an eye to quelling any potential anti-government protests but admitted that its remit did include stopping unsanctioned demonstrations.

Russian leaders have consistently voiced fears of a Western conspiracy to oust Putin through anti-government protests.

Ex-Soviet Ukraine – locked in a bitter feud with Moscow over the seizure of the Crimean peninsula from Kiev in 2014 and the fuelling of a separatist uprising in the east of the country – created a national guard to bolster its defence forces days before Russia took control of Crimea.

Putin also announced that Russia's federal migration service and its drug control service will be folded into the interior ministry.