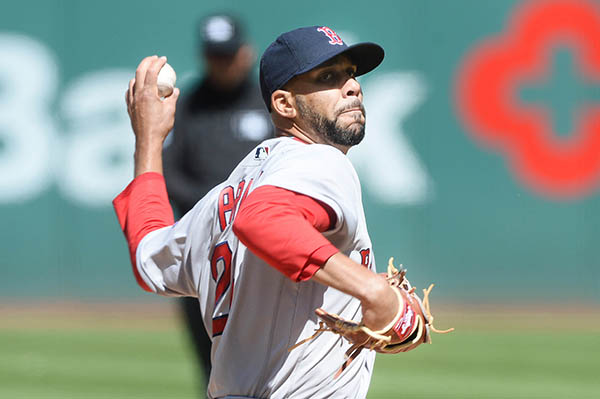 Boston’s Price throws a pitch against the Indians

CLEVELAND: The extra day didn’t bother the Red Sox and neither did the stinging cold.

New ace David Price delivered in his Boston debut. And, as usual, so did David Ortiz.

“When the light goes on, Papi goes on,” Ortiz said.

Price struck out 10 and won his weather-delayed first start for Boston and Ortiz began his farewell tour with a two-run homer, leading the Red Sox to a 6-2 win over the Cleveland Indians, who were forced to push their season opener back a day because of wintry conditions.

Price gave up two runs and five hits in six innings, giving the Red Sox an immediate payoff after they signed the left-hander to a seven-year, $217 million contract in December. Boston is hoping Price can push them back into contention in the AL East after the club finished last in the division three of the past four seasons.

Price set the tone for Boston’s reconfigured bullpen and he and three relievers didn’t allow a hit after the fifth inning and retired 16 of the last 18 Cleveland hitters.

Ortiz began his final season with a bang, connecting for his 504th homer in the ninth. Big Papi tied Hall of Famer Eddie Murray for 26th place on the career list and added a double.

With one out, Ortiz ripped a pitch from Trevor Bauer over the wall in right. When he crossed home plate, Ortiz pointed skyward as the Red Sox fans in attendance roared. It’s a sight Indians manager Terry Francona has seen many times before.

With the bases loaded and one out in the ninth inning, Toronto slugger Edwin Encarnacion hit a grounder to third. After taking a throw from Evan Longoria for the force at second, Forsythe made an errant relay to first that appeared to allow the go-ahead run to score for the Blue Jays.

Replay umpires in New York ruled Bautista’s slide was not directly into the bag and it illegally hindered Forsythe. The call was changed to a game-ending double play that preserved Tampa Bay’s victory.

Blue Jays manager John Gibbons argued with umpires on the field before finally heading toward the clubhouse.

Forsythe hit a two-run homer in the eighth off Brett Cecil (0-1) that ended the reliever’s run of 38 straight appearances without allowing an earned run, dating to June 24. The left-hander’s stretch was tied with Craig Kimbrel (2011 with Atlanta) for the longest in the majors since earned runs became an official stat in 1912 in the National League and one year later in the American League.

The Kansas City Royals received their 2015 World Series rings, then took a 2-0 loss to the Mets with Noah Syndergaard pitching six dominant innings.

The Pirates edged the Cardinals 6-5 in 11 innings, and the Tigers also needed 11 innings for an 8-7 win over the Marlins.

The Giants had a 2-1 win over the Brewers, with Johnny Cueto pitching seven solid innings to win his San Francisco debut.