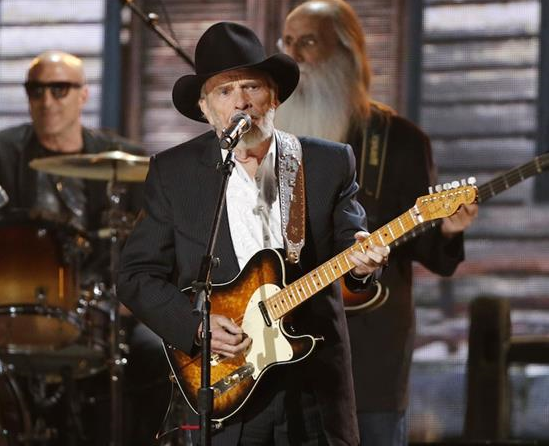 Nashville: Country giant Merle Haggard, who rose from poverty and prison to international fame though his songs about outlaws, underdogs and an abiding sense of national pride in such hits as Okie From Muskogee and Sing Me Back Home, died Wednesday at 79, on his birthday.

Haggard's manager, Frank Mull, said the country icon died in Palo Cedro, California, 12km east of Redding, of pneumonia that he had been battling for months. He had kept up an ambitious touring schedule, but the pneumonia in both lungs had forced him to cancel several shows this year.

A masterful guitarist, fiddler and songwriter as well as singer, the Country Music Hall of Famer with the firm, direct baritone recorded for more than 40 years, releasing dozens of albums and No 1 hits.

The White House called Haggard a "legend" and said President Barack Obama was sending his thoughts and prayers to Haggard's family. White House Press secretary Josh Earnest said Haggard told stories that people from all walks of American life could relate to.

"His passing is a loss for country music, but obviously is a loss for all the people who got to know him personally, too," Earnest said.

Haggard – along with fellow California country star Buck Owens – was a founder of the twangy Bakersfield Sound, a direct contrast to the smooth, string-laden country records popular in Nashville, Tennessee, in the 1960s.

His music was rough yet sensitive, reflecting on childhood, marriage and daily struggles, telling stories of shame and redemption, or just putting his foot down in The Fightin' Side of Me and I Think I'll Just Stay Here and Drink.

His most beloved songs included the prison ballad Sing Me Back Home, the tributes to his mother Mama Tried and Hungry Eyes, the romantic lament Today I Started Loving You Again and such blue collar chronicles as If We Make It Through December and Workin' Man Blues.

Few faces in country were as recognisable as Haggard's, with its wary, sideways glance and chiseled, haunted features that seemed to bear every scar from his past.

General audiences knew him best for Okie From Muskogee, a patriotic anthem released in 1969 at the height of the Vietnam War that quickly became a cultural touchstone for its anti-hippie lyrics proclaiming "we don't burn our draft cards down on Main Street; we like living right and being free."

Okie from Muskogee made him a hero among conservatives, but he softened on the counterculture and released the lighthearted Big Time Annie's Square, a tribute to a hippie girl and her "crazy world." More recently, he was a backer of prominent Democrats. In 2007 he unveiled a song to promote Hillary Clinton and two years later he penned Hopes Are High to commemorate Obama's inauguration. In America First, he even opposed the Iraq War, singing Let's get out of Iraq, and get back on track.

In 1970, Haggard was named entertainer of the year by the Country Music Association, and Okie From Muskogee won best album and single. The No 1 hits Mama Tried and Workin' Man Blues also broke onto the charts around that time, sealing his reputation as one of country's defining voices. He picked up another CMA album of the year in 1972 for Let Me Tell You About a Song.

Still, Haggard referred to the improvisations of his band, the Strangers, as "country jazz," and in 1980, became the first country artist to appear on the cover of the jazz magazine Downbeat.

He was inducted into the Country Music Hall of Fame in 1994, the same year he won a Grammy for best male country vocal performance in That's the Way Love Goes.

Haggard also began headlining at Farm Aid, the benefit founded by his longtime friend Willie Nelson, and started touring with Bob Dylan and the Rolling Stones.

Along with his albums of original songs, he recorded tributes to such early influences as country pioneer Jimmy Rodgers and Western swing king Bob Wills, and paired up with Nelson and George Jones among others. He also resisted the slick arrangements favoured by some pop-country stars.