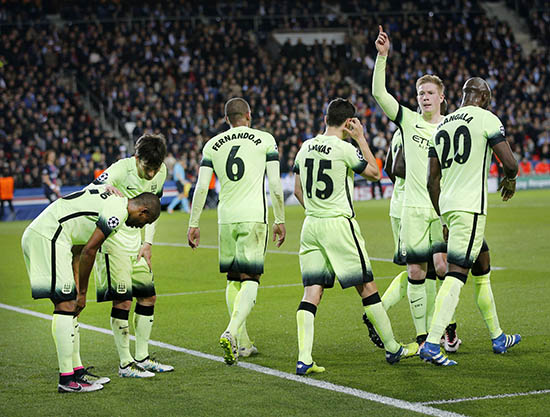 Paris: Manchester City claimed a vital edge in their Champions League quarter-final tie against Paris St Germain after grabbing two away goals in a 2-2 first leg draw early this morning.

Meanwhile, Zinedine Zidane’s Real Madrid suffered a shock 2-0 defeat at Wolfsburg in their own quarter-final, first-leg match-up to leave them on the verge of a European exit.

Just five days after ending Barcelona’s 39-game unbeaten run with a 2-1 away win in El Clasico, Real were humbled as Wolfsburg ignored their struggling mid-table form in Germany’s top flight.

PSG, playing in their fourth straight quarter-final in the competition, fell behind when Kevin De Bruyne opened the scoring in the 38th minute, but Zlatan Ibrahimovic capitalised on a City blunder to level, having earlier missed a penalty.

The home side, who had exited at this stage for the last three seasons, then took the lead through Adrien Rabiot just before the hour but Fernandinho made it 2-2 after benefiting from a PSG mistake.

City, who are playing in the quarter-finals for the first time, will host PSG at the Etihad stadium next Tuesday.

Both teams were without key midfielders as City’s Yaya Toure was ruled out with a knee injury and PSG’s Marco Verratti was sidelined with a groin problem.

PSG, crowned Ligue 1 champions last month, were boosted by the return of Serge Aurier, who was handed his first start since insulting coach Laurent Blanc in February while City welcomed back Joe Hart and the keeper made his presence count.

The home side made a shaky start with David Luiz picking up a yellow card in the first minute, which will rule the Brazil international out of the second leg.

Luiz, however, won PSG a penalty when he was brought down by Bacary Sagna in the 12th minute, only for Hart to deny Ibrahimovic with a sharp diving save to his right – his third straight penalty save in the competition.

It was a measure of revenge for Hart, who in 2012 conceded four Ibrahimovic goals as Sweden beat England 4-2 in a friendly.

Ibrahimovic looked nervy as he missed the target midway through the first half with only Hart to beat having been nicely played in by Thiago Motta.

It was a scrappy start by PSG, whose normally neat passing game lacked accuracy.

After Blaise Matuidi lost the ball in midfield, Fernandinho played De Bruyne through and the Belgian fired past Kevin Trapp to open the scoring.

Ibrahimovic, however, levelled three minutes later, capitalising on a bizarre City blunder. Hart played a goal kick to a Fernando, who dithered on the ball before his pass hit the Swedish striker’s outstretched foot and rolled into the empty net.

PSG went ahead in the 59th minute when Hart palmed away Edinson Cavani’s header into the path of Rabiot, who tapped in.

Meanwhile, Zidane had made just one change, Danilo in for Dani Carvajal at right-back, from the ten-man side which beat Barcelona.

But Real never recovered as first-half goals from Swiss defender Ricardo Rodriguez and Maximilian Arnold put the hosts 2-0 up at the Volkswagen Arena with 25 minutes gone.

Real’s six-game winning streak was ended as Wolfsburg picked up their first win in four games since beating Gent in the last 16 of the tournament.

To give the result context, Wolfsburg needed a 93rd minute equaliser to seal a 1-1 draw with relegation-threatened Darmstadt on their last home league appearance.