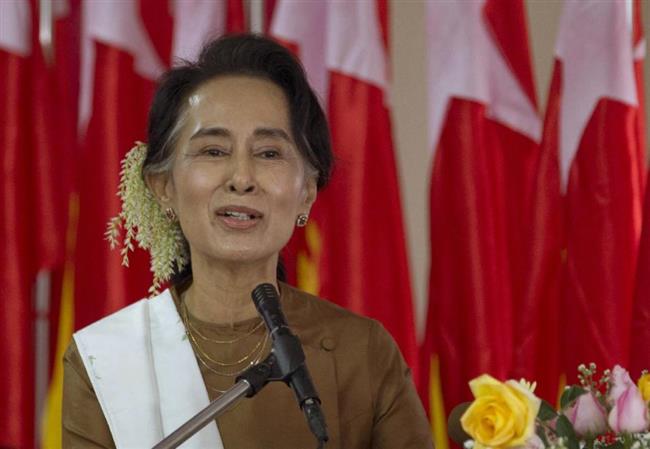 Yangon: Myanmar's Aung San Suu Kyi on Thursday vowed to press for the release of political prisoners and student activists, hinting that a mass amnesty may be imminent as her government seeks to stamp its mark on power in the former junta-run nation.

In her first statement since assuming a new broadly-defined role as state counsellor, Suu Kyi said: "I am going to try... for the immediate release of political prisoners, political activists and students facing trial related to politics".

She did not provide a specific timeline in the statement, which was released on Facebook.

The routine jailing of dissidents was one of the most egregious acts of the former junta, stirring international outcry and support for Suu Kyi's pro-democracy movement.

Suu Kyi herself spent some 15 years under house arrest, while many current National League for Democracy lawmakers served time in the country's notorious prisons.

While the quasi-civilian government that replaced the junta in 2011 freed hundreds of political detainees, it also oversaw the detention of scores more, particularly those involved in land and education protests.

According to the Assistance Association for Political Prisoners, 90 political prisoners were in jail and more than 400 activists were facing trial as of February.

The vast majority were arrested before last November's landmark elections, which Suu Kyi's NLD won in a landslide.

Among them are some 40 students facing a mix of charges including unlawful assembly and rioting over education reform protests in March 2015 that were violently broken up by baton-wielding police in the central town of Letpadan.

Another 30 or so students are on bail but facing similar charges.

Suu Kyi is barred from the presidency by the junta-era constitution and has anointed her school friend and close aide Htin Kyaw to act as her effective proxy.

That means she does not have the direct power to order an amnesty.

But the role of state counsellor, which she was officially given to her by President Htin Kyaw on Wednesday, allows her to liaise between the executive and legislative branches.

The position was specially crafted for the leader by MPs from her party and is expected to help Suu Kyi live up to a pre-election vow to rule "above" Myanmar's president.