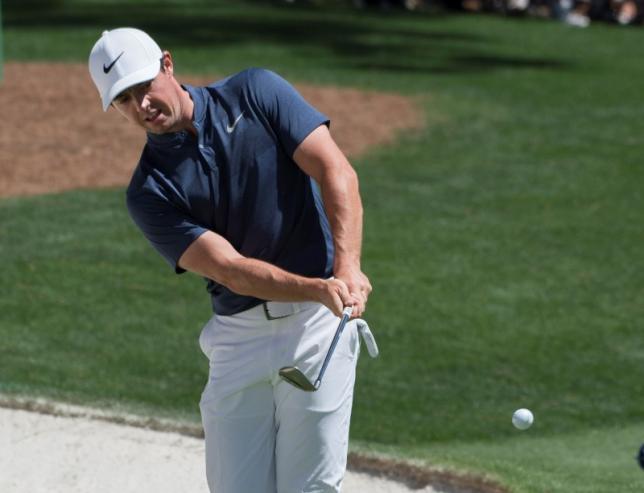 Rory McIlroy chips on at 16 during a Monday practice round for the 2016 Masters at Augusta National GC. (Reuters Photo)

Augusta: Rory McIlroy blew hot and cold on the opening day of the Masters on Thursday as he sought to emulate Tiger Woods, Jack Nicklaus, Gary Player, Ben Hogan and Gene Sarazen as the only players to win all four of the golf majors.

The 26-year-old Northern Irishman, a former world number one who is now ranked third, had five birdies against three bogeys as he came in with a 70 to stand four back of leader Jordan Spieth.

"I'm happy with how I played, happy with the score in the end," he said.

"It could have been a couple better, but at the end of the day, being here on a tough day in the top 10 and still within touching distance of Jordan, I'm pretty pleased with that."

McIlroy saved his best golf of the day for the par-five 13th when he was on the green in two and confidently sunk a 12-footer to get to four-under par, at that stage threatening to catch longtime-leader Spieth.

But a three putt at the 16th was followed by a miss-hit approach shot into a plugged lie in a bunker at the last, which made it almost impossible for him to get up and down.

That dropped him out of the 60s and left him feeling a little deflated.

"I felt like I let a couple of shots get away on 16 and 18. But again, I'm sitting here and if someone had have given me a 70 on the first tee, I probably would have taken it. It was a tricky day.

"But I feel like I can get off to a good start tomorrow and pick those shots up again in the first few holes and just get off and running again."

McIlroy said that Spieth's bogey-free round of 66 showed again just how well the 22-year-old Texan was able to play at Augusta National and how hard it would be to stop him from recording back-to-back wins.

"He's very, very comfortable here. You look at the way he played in 2014 and 2015 and look at what he has done this year, it's a golf course he's comfortable on and he's going to be tough to beat this week," he said.

"I'm going to have to play good golf, but I feel there's enough good golf in me to that I can reel him in over the next 54 holes."