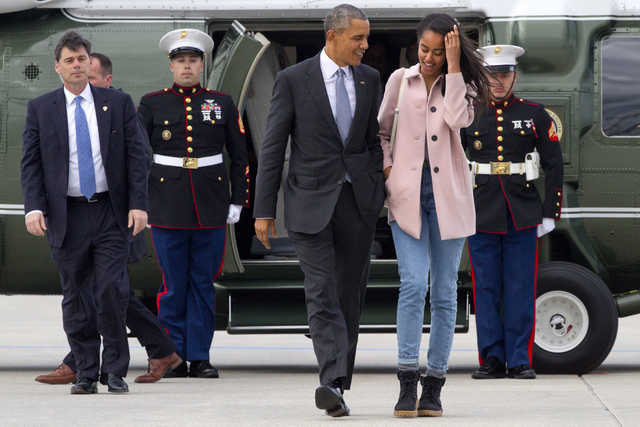 Obama jokes with his daughter Malia Obama as they walk to board Air Force One from the Marine One helicopter leaving Chicago en route to Los Angeles. (AP Photo)

President Barack Obama is fond of saying he has run his last election, but Hillary Clinton's shortcomings and Donald Trump's shock ascent are drawing him ever faster into the 2016 race.

Still, inside the White House, the panic is starting to ease.

In the early days of the Democratic primaries, Team Obama watched in horror as heir apparent Hillary Clinton stumbled and fumbled her way through contests against unlikely rival Bernie Sanders.

The former First Lady, former Secretary of State, former Senator – one of the most qualified presidential candidates in modern history – seemed uninspired and uninspiring, awkward on the stump and seen with suspicion by key swathes of the electorate, including, incredibly, women.

There was talk of an early presidential endorsement to prod the election-winning "Obama coalition" – African Americans, Latinos and college-educated whites – into getting behind her.

But that was a last-ditch nuclear option, one which risked fracturing the party and would inject Obama into the centre of the election when he still had a year of governing left to focus on.

Instead, Obama more subtly put his hand on the scales.

"(She) knows every policy inside and out - sometimes (that) could make her more cautious and her campaign more prose than poetry, but those are also her strengths. It means that she can govern and she can start here, day one, more experienced than any non-vice president has ever been who aspires to this office."

Even before that glowing appraisal, it had been an open secret that the Obama White House saw Clinton, whom he beat in 2008, rather than Sanders as the guarantor of his legacy.

The leftist Vermont Senator may be likeable and may say things that appeal to the same young voters who helped bring Obama to the White House. But if he became the nominee his narrow electoral appeal could likely spell crushing defeat in the general election, bringing Obama's legacy into question.

Facing a hostile Congress in his second term, Obama has leaned heavily on executive actions to make his mark as president.

But executive actions to prevent millions of illegal immigrants from deportation, weakening the Cuba embargo, a nuclear deal with Iran, or tackling climate change could be undone with the stroke of a Republican presidential pen.

So there was relief when Clinton hugged Obama hard, improved her pitch, won big among black and Hispanic voters in southern states and began a relentless marching toward the 2,383 delegates needed to secure the party nomination.

Today the Democratic race continues, but the outcome seems in less doubt. Now it is the vitriolic no-holds-bared Republican race that has drawn Obama into the election race faster than expected.

Obama has gone from expressing confidence that the bombastic real estate tycoon will not been elected to warning Trump is hurting America's standing in the world.

Lashing out at "vulgar and divisive rhetoric" Obama has attacked Trump's plan to force Mexico to pay for a border wall as "half baked" and his views on East Asia as those of someone who "doesn't know much about foreign policy, or nuclear policy, or the Korean peninsula, or the world, generally."

Obama was always going to find Trump objectionable. As so often in American politics, popular new candidates appear to be the antithesis of the incumbent.

Where Obama is eloquent and ponderous, Trump is rambling and instinctive.

But observers say Obama's sharper tone represents a real fear, as well as a real sense of opportunity.

"I think he feels the stakes are pretty high and the threat of Trump very real, as well as (Texas Senator Ted) Cruz," said Julian Zelizer, a professor of history at Princeton University.

"If the Democrats were not as divided I think he would step in even more aggressively."

Obama's poll numbers appear to have benefited from Trump bashing and contrasting the silliness of the campaign with the seriousness of the Oval Office, but there is also an electoral purpose.

Although Trump's standing outside hardline Republican circles looks border-line fatal for the general election, the White House will be concerned about his ability to woo disgruntled voters in the rust belt.

Trump won the Michigan and Illinois primaries handily and is polling well in Pennsylvania, where the Great Recession hit hard.

If he were able to convert that into wins in those states in the general election it would put the White House within striking distance.

Obama is increasingly giving a preview of what his role might be in preventing that scenario, raising cash for the Democratic Party and energising young Democrats and those from minorities.

A recent high-energy fundraising trip to Austin, Texas was likely a preview of election events in college towns from Madison, Wisconsin to Ames, Iowa.

Obama is likely to spend much of his time trying to ensure that the coalition that served him so well – young college-educated voters, African-Americans, Latinos – stay angry and Republicans keep turning out to vote.

"Obama's role in the campaign will likely resemble that of Ronald Reagan in 2008 more than the efforts of Bill Clinton or George W Bush," said Brendan Doherty of the US Naval Academy's Department of Political Science, contrasting elections where popular presidents were invoked and two unpopular presidents shunned.

As one aide put it: "He's still the most popular politician across America."