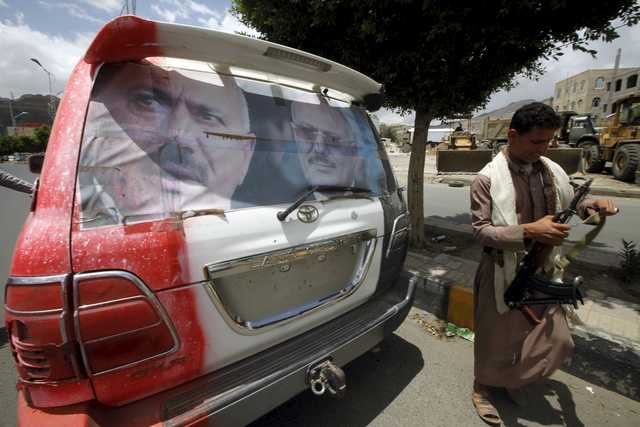 A man carrying a weapon walks past a car adorned with a poster of the former President Ali Abdullah Saleh in Sanaa. (Reuters Photo)

At least 12 fighters died on Friday in clashes between loyalists and rebels in Yemen's Marib province east of Sanaa, two days ahead of a UN-announced ceasefire, military sources said.

They said the clashes, which according to a preliminary toll killed seven pro-government fighters and five rebels, broke out around the town of Sarwah which loyalists have been trying for months to recapture from Shiite Huthi rebels.

Saudi-led Arab coalition warplanes circled overhead but did not drop any bombs or fire missiles, an AFP correspondent at the scene said.

The rebels said on their website, sabanews.net, that a three-pronged government offensive was repelled with the loss of 35 loyalists.

A ceasefire is due to come into effect in Yemen at midnight on Sunday, with the UN hoping it can be the cornerstone of a peace deal at talks due to start on April 18 in Kuwait.

The UN says the Yemen conflict has cost the lives of about 6,300 people – nearly half of them civilians – since the Arab coalition intervened on the side of the government in March 2015.