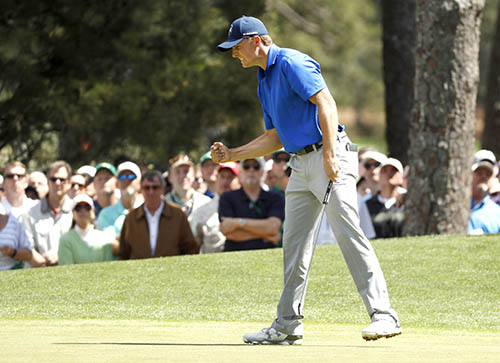 Augusta: Jordan Spieth threatened to run away with his second consecutive Masters crown before stumbling twice on the front nine and reaching the turn with only a three-shot lead over Rory McIlroy in yesterday’s second round at windy Augusta National.

The 22-year-old American, who won last year’s US Open and Masters, stood on six-under par overall with nine holes to play, one-over on the round after a bogey at nine and a double-bogey blip at the par-4 fifth.

“It depends on how Jordan is going,” said Australia’s top-ranked Jason Day. “He seems to love this course and love this place. It depends on what he does.”

Giving hope to a chasing pack that struggled in vain to gain ground on the 18-hole leader was McIlroy, who seeks a victory to complete a career Grand Slam.

He was two-over through 12 holes but birdied the par-5 13th and 15th and par-3 16th to seize sole possession of second.

“He’s a phenomenal talent and it’s my job and Jason’s job and everyone else’s to try to stop him dominating,” McIlroy said of Spieth on Tuesday.

Spieth is trying to join Tiger Woods, Jack Nicklaus and Nick Faldo as the only players to win the Masters two years in a row.

He would also overtake Day for world number one with a Masters win if the Aussie finishes outside the top five. Day struggled in the wind to fire one-over 73 yesterday and stand on one-over 145 overall.

“One-over is probably par for us,” Day said. “I felt like I did all right but it’s just tough out there. It’s really tricky. At Amen Corner (holes 11-13) you don’t know where the wind is coming from.

“It almost feels like a US Open where you have just got to survive. I’m just trying to survive right now.”

Lee fired a 74 yesterday, closing bogey-bogey to fall back, while Piercy shot 72, unable to make a run after birdies on two of the first three holes.